Captain Whisker and his pirate crew

Tabby (タビー, Tabī?) is a character that appears in the Sonic the Hedgehog series. He is an anthropomorphic koala and a member of the Coconut Crew, a youth association from Southern Island.[1]

In Sonic Rush Adventure, he appears at Southern Island after completing Plant Kingdom. When the player talks to Tabby, he can assign Sonic missions. Should the player completes these missions, Tabby will decorate Southern Island with various animals as a reward.

Tabby is an anthropomorphic koala with mostly gray fur covering his body, along with white fur covering his front torso, muzzle, hands and inner ears. He also has small and beady black eyes, a large and flat black nose, cheek tufts, and bushy ears near the top of his head. For attire, he wears a yellow straw hat with holes for his ears, a green traveling backpack with a beige rolled-up wrapper packed on top of it, and brown shoes with gray straps, black soles, and white toes.

Some time ago, Tabby came to know Marine, but later left Southern Island to travel alone.

In Sonic Rush Adventure, while Tabby was on Plant Kingdom, he heard someone nearby and was pleasantly surprised to see that it was Marine. Noticing that she was with Sonic and Tails, Tabby had Marine introduce her associates to him. Returning to Southern Island, Tabby heard from Sonic, Tails and Marine that they were looking for Materials to build sea vessels. Tabby therefore suggested that they sailed to the southwest of Plant Kingdom to Machine Labyrinth where they could supposedly find new Materials.

When Sonic and Tails were later leaving in the SS Tornado EX to return to their own dimension, Tabby and some of the other members of the Coconut Crew came to say goodbye to them alongside Blaze.

Tabby is an avid adventurer, having traveled to various places. Having enough manners to properly greet old friends, he is helpful and willing to share his knowledge with others. Similar to Marine, he also speaks with a slight Australian accent.[1]

In the Sonic the Hedgehog comic series and its spin-offs published by Archie Comics, Tabby is a mobian koala who lives on Southern Island. 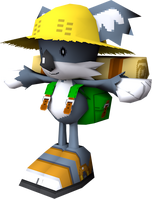 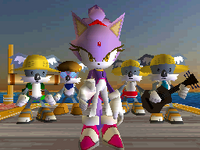