For other uses of the term, see SWATbot (disambiguation).

A Swat Bot, from Sonic Chronicles: The Dark Brotherhood.

The Swat Bot is an enemy that appears in Sonic Chronicles: The Dark Brotherhood. It is a very old model of Badnik which was used by the Nocturnus Clan.

Following Dr. Eggman's presumed death and the Nocturnus Clan's attempt to escape from the Twilight Cage, the Swat Bots were found by the Nocturnus Clan, who took control of them and began using them as a part of their own forces.

In Chapter 3, the player will meet a Swat Bot that has forgotten its programming,and it asks the player what it shall do. The player can either tell it that it works for Dr. Eggman and fight it, or tell it that its job is done and it may rest now, which will make the Swat Bot go away. Also, during the side mission "Poisoned the N'rrgal Supply" that becomes available in Chapter 8, a lone Swat Bot that got sucked into the Twilight Cage will appear, where it is revealed to be responsible for spoiling the N'rrgals' spawning pools.

The Swat Bots possess notably heavy armor that can only be pierced by high-power attacks or armor-piercing attacks. If a Swat Bot is defeated, but the battle continues due to other enemies still remaining on the opposing side of the battlefield, the defeated Swat Bot can initiate Self Repair (じこしゅうり, Ji ko shūri?) at the end of the round, which revives it by restoring 23-28 of its Health Points and allows it to re-enter the battle. The only way to avoid this is by defeating all enemies present.

The Swat Bots' basic attack is punching their opponents with their fists. Their POW move is Crusher (クラッシュ, Kurasshu?, lit. "Crush") which can inflict Weaken. They also come in a stronger variant called Swatbot Mk. II. 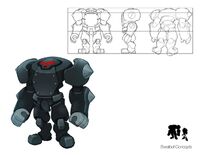 A Swat Bot in gameplay.