Super Tails (スーパテイルス, Sūpa Teirusu?) is a transformation that appears in the Sonic the Hedgehog series. It is the Super State of Miles "Tails" Prower, achieved by harnessing the power of either the seven Super Emeralds or Chaos Emeralds.

When transformed into Super Tails, Tails' physical traits remain unchanged. However, he does gain a pulsating golden energy shield around himself.

In the Sega Mega Drive-derived games, Super Tails lacked a shield surrounding him. Instead, his orange fur pulsated with a golden color.

Super Tails first appeared in the lock-on game Sonic the Hedgehog 3 & Knuckles. The transformation can only be obtained by collecting the seven Super Emeralds while playing as Tails.[1] The player can then activate Tails' Super State by collecting fifty Rings and then press the jump button twice. While Tails is transformed, the player's Ring count drops by one Ring every second. When the Ring count hits zero or when the Act Boss is defeated, the transformation runs out.

In gameplay, Super Tails is invincible and can move and fly faster. While transformed, Super Tails also summons four super transformed Flickies which follow him around. These Flickies will home into any nearby target, boss, or enemy, and deal one hit worth of damage, even on Hyudoros. When Super Tails' form wears off, his Flickies fly away.

In Sonic Heroes, Super Tails appeared as the Fly Type member of Team Sonic.[note 1] When Metal Overlord took off, Sonic transformed into Super Sonic and shared his energy with Tails and Knuckles, allowing them to achieve their own Super States and go after Metal Overlord together. With the power of teamwork, Team Sonic defeated Metal Overlord.

In gameplay, Super Tails cannot take damage, though he can be blocked from moving for a while when attacked, and he has automatically obtained three yellow Power Cores. His Thunder Shoot has also been upgraded, giving it a far greater range. During the boss battle, the player's Ring count drops by one every second, and when it runs out, Tails and his team revert back to normal which will cost the player a life.

In the 2013 remaster of the original Sonic the Hedgehog, Super Tails can be unlocked as a bonus feature in the gameplay for Tails. On Level Select, the player can change the Max Emeralds setting from 6 to 7 to get all seven Chaos Emeralds. After that, the player can use Super Tails in any of the Zones with Tails after collecting fifty Rings. His appearance is the same as in Sonic the Hedgehog 3 & Knuckles.

Super Tails' abilities are the same as in Sonic the Hedgehog 3 & Knuckles, except that he does not possess his super transformed Flickies. Like before, the player's Ring count drops by one for every second Super Tails is active. When it reaches zero or upon finishing an Act, Tails reverts back to normal.

In the 2013 remaster of Sonic the Hedgehog 2, Tails' super transformation is accessible via Debug Mode by placing the S Monitor and then breaking it. While unnamed, his appearance and abilities are identical to that of the updated Super Tails in the 2013 re-release of the original Sonic the Hedgehog.

Due to being infused with the seven Chaos Emeralds' power, Super Tails accordingly commands ultimate power and has access to unlimited energy.[2][3] As Super Tails, Tails' innate abilities far surpasses his normal ones. Not only is his strength multiplied many times over, but his speed has been greatly enhanced too, allowing him to keep up with even Super Sonic who can move at the speed of light and presumably beyond.[4][5] His reflexes are also improved, allowing him to keep up with his increased movements. Like the traditional Super State, Tails gains new abilities in this form, including high-speed run-flight without having to use his twin tails and virtual invulnerability to harm.

All of Super Tails' standard techniques has been greatly enhanced following his transformation; his Thunder Shoot technique for example has been given much greater range and power, enough to shoot down even Metal Overlord's spines. Super Tails can also manipulate Chaos Emerald energy to a certain degree, like passing it onto Flickies to let them achieve a Super State of their own.

Super Tails can only stay transformed for a short time without sustainment from Ring Energy, as a Super State consumes tremendous amounts of energy. Extensive usage will also put him at risk of disappearing entirely.[6]

Before Sonic the Hedgehog 3 & Knuckles, there were ways to initiate the transformation in previous games, but it is never named or observed in normal gameplay. These methods typically utilize codes or tricks such as the built-in Debug Mode.

A simplistic form of Super Tails can be achieved in the original console versions of Sonic the Hedgehog 2. The easiest way involves placing a monitor in Debug Mode whilst Sonic is in his Super State; breaking it will cause Tails to be invulnerable, surrounded by invincibility stars, and have increased speed (on par, if not faster, than Sonic). This happens due to the fact that the default monitor in Sonic the Hedgehog 2—the 2-player Vs. Mode "Teleporter" monitor—not only switches players' positions, but players' statuses as well. (Shield, Speed-Up, Invincible, etc.). Another peculiarity with "Super" Tails is that even if Sonic loses all his Rings or Tails has to catch up to Sonic for some reason, Tails continues to be invincible and super fast indefinitely.

Another exploit doesn't involve Debug Mode. First, the player must collect all of the Chaos Emeralds in 1-Player Mode. After doing this, the player will have to find a way to lose their lives or complete the game, and enter the 'Options' menu. After that, if the player highlights 'VS Mode items' and presses the START button, they will enter the 2P level select with all of the collected Emeralds. If Sonic collects fifty Rings and jumps, he will transform into Super Sonic, but with his sprite jumbled (the game's attempt to match regular Sonic's sprite size since he cannot transform in 2P normally). If Super Sonic smashes a teleport box whilst in transformation, the Super State will transfer to Tails. Sonic still appears Super though, and due to the game's engine he will not be able to get invincibility or gain his Super State abilities again until he loses all of his rings. The reason the Super State is attainable in the VS mode is because the number of Chaos Emeralds collected is carried when accessing through the Options menu.

It should be noted that while Sonic will appear to still be in his Super State and will still lose rings, he will not have speed or invincibility and therefore will lose rings when damaged. Oddly enough, he does retain his high-jumping ability.

Tails can also enter the transformation in Sonic the Hedgehog 3 via Debug Mode. If Tails smashes the special S monitor, he gains invincibility, the ability to crush non-Knuckles Spin Dash-only breakaway objects by walking through them. He also gets a sparkle effect when going beyond his top speed, but gains no glow, no palette changes, and no enhancements.

His sprite will also be jumbled in the game's attempt to match Super Sonic's sprite size (since Tails cannot go super normally) unless you press the Debug Mode button after hitting the S-Monitor, but before he transforms. If Tails clears Launch Base Zone after hitting an S-Monitor at any time during the game, his ending sprite gains Sonic's palette, giving him a golden glow. His Ring counter never drains and clearing an Act will not make him lose his invincibility or stop the Super Sonic music from playing, but going into a Special Stage or Gumball Machine will. Entering a new zone also removes the invincibility and restores the music if a musical silence is called, but he still has the ability to destroy breakaway objects by walking into them.

"Yeah, we did it!"
—Super Tails after finishing off Metal Overlord, Sonic Heroes 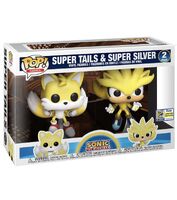