For other uses of the term, see Super Special Sonic Search and Smash Squad (disambiguation).

The symbol of the S.S.S.S.S. Squad

The Super Special Sonic Search and Smash Squad, also known as the S.S.S.S.S.S., or S.S.S.S.S. Squad, is one of the main antagonists in Adventures of Sonic the Hedgehog. It is a trio of robots created by Dr. Ivo Robotnik with the purpose of hunting down and stopping the doctor's mortal arch-enemy, Sonic the Hedgehog. The group consists mainly of Scratch and Grounder, with Coconuts often showing up as an unofficial member. They serve as Dr. Robotnik's main henchmen. However, due to each member of the group being highly incompetent and gullible, the group always fails in their efforts to stop Sonic and his sidekick Miles "Tails" Prower and usually ends up causing more harm than good for their creator, who in turn punishes them with severe physical and verbal abuse. They largely serve as the comic relief of the show.

After Doctor Robotnik's newly created group of robot bounty hunters failed to stop Sonic when he infiltrated their meeting, the doctor decided to take a new approach in his battle with Sonic by creating a new group of elite robots for the sole purpose of capturing Sonic. This group is what would become the Super Special Sonic Search and Smash Squad.

Using the full extend of his "vile and wicket genius", Robotnik began constructing the group in his fortress, building the members to be strong, fearless, wild and highly intelligent. As he was in the process of creating the first member of his robot group, however, his Robo-matic machine somehow malfunctioned, thus producing Scratch, a product almost exactly the opposite of what Robotnik wanted (the doctor believed he had made him "too chicken"). Nevertheless, Robotnik decided to clone Scratch to produce a second member for the S.S.S.S.S. Squad. Plucking one of Scratch's feathers and throwing it into the Robo-matic machine, Robotnik hope to create a perfect replica of Scratch, but Scratch accidentally pulled an extra lever that caused the machine to make some slight modifications to his clone, thus creating Grounder.

When Scratch and Grounder first met each other, their partnership came off to a rocky start as they began arguing about who was Robotnik's favorite. However, after Robotnik hit them with a table, he ordered them to go out on their first mission to catch Sonic. However, due to Scratch and Grounder's stupidity, Coconuts, who held a grudge at the S.S.S.S.S. Squad for taking his job and demoting him to janitor duty, and Sonic's sneakiness, the group failed miserably in their mission, much to the frustration of Dr. Robotnik.

Despite their failure, however, Robotnik decided to keep the S.S.S.S.S. Squad active, making them his foremost and closest henchmen, possibly hoping that they would succeed in their mission one day. Over time, Coconuts became a part-time member of the S.S.S.S.S Squad, but only helped out occasionally, while Scratch and Ground remained full-time members. Unfortunately, the S.S.S.S.S Squad proved to constantly fail in the doctor's assignments to stop Sonic and even sometimes (unwillingly) helping Sonic in stopping Robotnik's schemes, which sometimes made Robotnik think he wound be better off having "a vacuum cleaner and a toaster" for henchmen.

The entire S.S.S.S.S Squad appeared in the game Dr. Robotnik's Mean Bean Machine where they each serve as an opponent that the player had to defeat in order to progress further.

Following Robotnik's death, the S.S.S.S.S. Squad took Coconuts up as a third member and began working for Mammoth Mogul in the Casino Night Zone. Following the events of Worlds Collide, the new reality found them as a team once again, but this time in the employ of Breezie the Hedgehog. 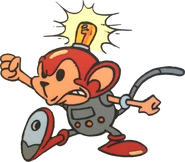 All three members of the SSSSSS
Add a photo to this gallery
Retrieved from "https://sonic.fandom.com/wiki/Super_Special_Sonic_Search_and_Smash_Squad?oldid=2242473"
Community content is available under CC-BY-SA unless otherwise noted.