Super Sonic, from Sonic the Hedgehog #287.

The power to turn dreams into reality. It's our purest desires given form.

When transformed, Sonic's blue fur most noticeably turns into a brilliant gold color. Additionally, his green eyes become ruby red and his quills turn upward instead of hanging down, almost lifted entirely over his head. He also possesses a golden aura that varies in size and can be anything from smooth to flame-like in shape. His aura also sometimes displays faint sparkles.

Sonic is known to have achieved this form on numerous occasions in the past, the earliest known instance being to destroy the original Death Egg.[1] Later instances include stopping Perfect Chaos's rampage through Station Square,[2][3] stopping the Space Colony ARK from colliding with the planet (with the aid of Super Shadow),[4] battling Metal Overlord with Miles "Tails" Prower and Knuckles the Echidna's aid,[5] and foiling the plans of both Dr. Eggman and Dr. Eggman Nega (with the aid of Burning Blaze).[6][7] Sonic has also twice attained this form to battle time-traveling threats, such as the monstrous Solaris and the sinister Time Eater.[8][9]

When Sonic's world was rewritten along with Mega Man's reality's reality, Sonic had the idea to turn Super after Mega Man used the Rush Adaptor to turn into Super Mega Man, and the two used the Chaos Emeralds to turn Super. Together, they stopped the ambitions of Dr. Eggman and Dr. Wily in their Egg-Wily Machine X. He taught Super Armor Mega Man how to manipulate Chaos Control in order to bring their respective realities back to normal, but when Super Sonic attempted to use it on his reality, Eggman interrupted him, resulting in the Shattered World Crisis.[10]

Note: From the readers point of view, this picks up from where Super Sonic's original timeline ended.

During the decisive battle against Sigma-3, Sonic and Mega Man harnessed the Unified Army's seven Chaos Emeralds to go Super and engage the god-like Sigma.[11] Though the two heroes initially struggled against Sigma, they managed to destroy him once he was cut off from his Master Engine. As reality began falling apart from Sigma's misuse of the Genesis Portals, Super Sonic and Super Armor Mega Man tried fixing it with Chaos Control, only to find reality too damaged for it to work. Fortunately, Xander Payne saved them by rewriting history so that Sigma never made his move.[12]

Later, as Chip was set to battle the fully-awakened Dark Gaia via the Gaia Colossus at the climax of the Shattered World Crisis, Sonic harnessed the Chaos Emeralds' power to become Super Sonic and speed up the otherwise centuries-long battle by helping Chip battle Perfect Dark Gaia.[13] Though a formidable foe at first, Dark Gaia eventually weakened itself and was finished off when Super Sonic pierced its middle eye.[14]

In this state, Super Sonic's innate talents are vastly increased, giving him highly amplified speed and strength, enough to let him go toe-to-toe with god-like beings such as Sigma-3, Perfect Chaos, and Perfect Dark Gaia. Like the traditional Super-State, Sonic gains new abilities too, including high-speed flight and virtual invulnerability to harm; even when hit by Sigma-3's energy blast, he only got slightly singed.

As Super Sonic, Sonic is able to freely manipulate Chaos energy. He can charge his fists with chaos energy to amplify the strength of his strikes and can as well perform Chaos Control which allows him to bend time and space to his will. This transformation tends to use "positive" Chaos energy and thus can also help Sonic overwhelm beings powered by "negative" energy.
==Gallery== 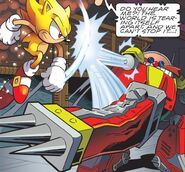 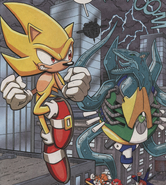 Retrieved from "https://sonic.fandom.com/wiki/Super_Sonic_(Archie)?oldid=1728885"
Community content is available under CC-BY-SA unless otherwise noted.