Former Nintendo CEO Satoru Iwata first announced that a new Super Smash Bros. game was planned for Nintendo 3DS and Wii U at E3 2011 in June 2011, but development only officially began following the completion of series creator Masahiro Sakurai's other project, Kid Icarus: Uprising, in March 2012.[5][6] The game was later revealed to be a joint-project between Bandai Namco Studios and Sora Ltd., with various staff members from Bandai Namco's Soulcalibur and Tekken series assisting Sakurai in development.[7][8][9] Other companies also assisted with its development, such as tri-Crescendo.[10] Sakurai, who was previously the sole person responsible for balance in the series' multiple fighters, has involved more staff to further improve the game's competitive balance.[11] The game was officially revealed at E3 2013 on June 11, 2013, during a Nintendo Direct.[12] Along with screenshots being posted each weekday on the game's official website and Miiverse community,[13] various cinematic trailers were released, introducing each of the brand new fighters. Sakurai chose to use these trailers, which benefit from Internet sharing, as opposed to including a story campaign similar to the Subspace Emissary mode featured in Brawl, as he believed the impact of seeing the mode's cinematic cutscenes for the first time was ruined by people uploading said scenes to video sharing websites.[14][15]

At E3 2013, Sakurai stated that the tripping mechanic introduced in Brawl had been omitted, with him also stating that the gameplay was between the fast-paced and competitive style of Melee and the slower and more casual style of Brawl.[16] While the game does not feature cross-platform play between the Wii U and 3DS, due to each version featuring certain exclusive stages and gamemodes, there is the option to transfer customized characters and items between the two versions.[17] The game builds upon the previous game's third-party involvement with the addition of third-party characters such as Capcom's Mega Man and Bandai Namco's Pac-Man, as well as the return of Sega's Sonic the Hedgehog. This involvement expands beyond playable characters, as other third-party characters, such as Ubisoft's Rayman, are also included in the game as trophies.[18] The addition of Mii characters was made in response to the growing number of requests from fans to have their dream characters included in the game. To prevent potential bullying, as well as to maintain game balance online, Mii Fighters cannot be used in online matches against strangers.[19] The decision to release the Wii U version at a later date from the 3DS version was made to allow each version to receive a dedicated debugging period.[20] Hardware limitations on the Nintendo 3DS led to various design choices, such as the removal of mid-match transformations, the lack of Circle Pad Pro support,[21] and the absence of the Ice Climbers, from the NES game Ice Climber, who were previously playable in both Melee and Brawl.[22]

In late August 2014, a series of allegedly leaked photos and videos of the 3DS version were uploaded to the Internet, revealing at the time several unannounced fighters. The original videos were removed shortly thereafter citing a copyright claim by Nintendo of America.[23][24][25] These leaks were confirmed on September 11, 2014 when various gamers in Japan and Taiwan obtained the 3DS version two days prior to its release date and streamed footage of the game on Twitch.[26]

Inclusion of Sonic the Hedgehog

On October 1st, 2013, it was announced on a Nintendo Direct that Sonic the Hedgehog would return as a playable character in the game.[27][28][29] Unlike in Super Smash Bros. Brawl, Sonic is available from the start of the game and is now voiced by Roger Craig Smith instead of Jason Griffith. However, his voice clips are ripped from other Sonic games like Sonic Generations, Mario & Sonic at the London 2012 Olympic Games, and Sonic & All-Stars Racing Transformed. Shadow the Hedgehog reprises his role as an Assist Trophy, slowing down time with Chaos Control for everyone except the player who summoned him.

In addition to the inclusion of Sonic as a playable character, there is a new stage in the Wii U version based on Windy Hill from Sonic Lost World.

In addition to the inclusion of Sonic as a playable character, the Green Hill Zone returns from Brawl in the 3DS version and is also available from the start, and now has an "Ω Form" that changes its layout to a flat platform similar to the Final Destination level.

The Eggrobo makes an appearance as an enemy in the 3DS-exclusive mode Smash Run. Eggrobos will float in the air and try to keep their distance from players, attacking with a barrage of laser shots or a single powerful laser.

Due to the hardware capabilities along with other such hardware used in the Nintendo 3DS and Wii U, there are many differences with almost everything in the game.

All Sonic music that appears in the Wii U version.

Trophies (or Figures in Japan) are collectible items that represent various characters, items, and other elements from the many games released by Nintendo and, in the case of Brawl onwards, from third-party franchises such as ' Sonic the Hedgehog as well. These collectibles are optional and appear as figurines on a golden stand, providing some information about the collectible displayed. The trophies available are different in both the 3DS and Wii U versions, with the 3DS version having more Sonic trophies than the Wii U version. Unlike other games, the trophies in the 3DS version do not list character appearances. Usually the Wii U trophies are given two games, their primary debut game with no console associated and their Nintendo debut game.

The following Trophies are exclusive to the Nintendo 3DS version.

The following Trophies are exclusive to the Wii U version.

Nintendo's toys to life figurines were first released for the Super Smash Bros. line. The Sonic the Hedgehog franchise has received one Amiibo figure, which is Sonic: 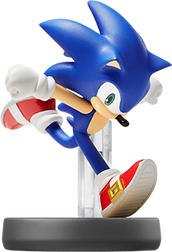 Sonic Amiibo in the packaging
Add a photo to this gallery

Super Smash Bros. for Nintendo 3DS has received generally positive reviews. Much of those include a high rating of 37/40 from Famitsu and a 9/10 from Destructoid and among others. Most of the critics praised for a diverse roster, the amount of unlockable features and characters found in the 3DS version of the game, and also, the number of modes that are available to play in the 3DS version as well. However, there are some things that the critics may not like in the long term as well. Some criticized about the lag while playing multiplayer, Smash Run and for some, they also criticize the controls in the games while some praise it. The worst reviews that came for the 3DS version was from GamesRadar which game it a mediocre 3/5 due to the "latency problems in local multiplayer".

The game eventually made major sales after Japan got the game first and with strong sales in North America and the PAL Regions. At its first weekend after the Japanese Launch,[31] up to a million copies are sold, and as of October 7, 2014, up to 2.8 Million copies are sold for the 3DS Version.[32]