Sonic News Network
Register
Don't have an account?
Sign In
Advertisement
in: Featured Article, Attacks and moves, Sonic the Hedgehog CD,
and 5 more

Sonic performing the Super Peel Out, from the Wii U version of Sonic Lost World.

A forward dash at maximum speed, creating a specific pattern on the user's legs.

The Super Peel Out[1] (ダッシュ[2], Dasshu?, lit. "Dash"), also known as the Strike Dash[3] (ストライクダッシュ[4], Sutoraikudasshu?) and Charged Dash, is a move that appears in the Sonic the Hedgehog series. When performing this technique, the user moves their legs in a specific circle pattern, while remaining stationary, before taking off at higher-than-average speeds.

When performing this move, the user bends down slightly in a standing position and begins moving their legs in a specific pattern to build up speed, all while remaining still in one spot. Once they have built up enough speed, the user blasts forwards at extreme speeds.

In gameplay, like the Spin Dash, the Super Peel Out allows the user to attain great speeds from a standing start. As such, the move lets the user reach higher speeds that the Spin Dash can. The user can also continue to accelerate without first jumping to get out of their Spin Attack position. The Super Peel Out will then last until the user either jumps or slows down.

The main disadvantage of the Super Peel Out is that, unlike a Spin Dash, the user does not perform a Spin Attack while performing this move and it cannot damage enemies.

To perform this move in gameplay, the player has to first press up on

In Sonic Chaos, the move is named the Strike Dash (ストライクダッシュ[5], Sutoraikudasshu?), and is again a part of Sonic's moveset. In this game, instead of forming a figure-8 pattern with his legs when using the move, Sonic moves his legs in a circle pattern.

To perform this move in gameplay, the player has to press up on the

In Sonic the Hedgehog Triple Trouble, the Super Peel Out is referred to as Strike Dash[3] (ストライクダッシュ[4], Sutoraikudasshu?) again. The appearance of the move is the same as it was in Sonic Chaos. Once again, it is a move used exclusively by Sonic. When performing the Super Peel Out in this game, Sonic is made invulnerable to harm for a short time, meaning the technique can also be used as an attack.

To perform this move in gameplay, the player has to hold up on

to charge. Once Sonic's feet starts to fly, the player has to release

In Super Smash Bros. Brawl, the Super Peel Out appears as Sonic's running animation and side taunt. In this game, the move's appearance is the same as in Sonic the Hedgehog CD.

In Super Smash Bros. for Nintendo 3DS and Wii U, the Super Peel Out returns as Sonic's running animation and side taunt.

In Super Smash Bros. Ultimate, like in the previous two installments, the Super Peel Out serves as Sonic's running animation and side taunt.

In the Wii U version and PC version of Sonic Lost World, the Super Peel Out is referred to as the Charged Dash.[6] In this game, it is a move that Sonic and the Virtual Hedgehog are able to perform. In gameplay, it can be charged in one place, like the Spin Dash. To perform the Charged Dash in gameplay, the player must hold

while standing still to rev up the move. The move takes around two seconds to charge, indicated by the figure eight-like blur appearing around the user's legs. Once the player releases

, it will send the user running into a Dash.

In Sonic Mania and its expansion Sonic Mania Plus, the Super Peel Out is one of Sonic's alternate moves which can be unlocked after collecting one Medallion. It can be chosen by toggling the Sonic Ability option to "CD" at the Game Options menu in Mania Mode, effectively replacing the Drop Dash in gameplay (though it is possible to still perform both moves alongside with the Insta-Shield in No Save mode with Debug Mode enabled). It functions identically to how it did in Sonic the Hedgehog CD. When used by Super Sonic, his feet does not move in a circular pattern while charging the move and instead uses his normal "gliding" animation to do so.

To perform the Super Peel-Out in gameplay, the player has to press the following buttons:

In Sonic Advance 2 and Sonic Advance 3, Amy Rose can use a move called the Amy Dash, which is nearly identical to the Super Peel Out, except Amy's legs do not make the figure eight.

Sonic the Hedgehog: The Movie

Sonic uses the Super Peel Out multiple times in Sonic the Hedgehog: The Movie. The move is usually seen when Sonic is building up speed or is about to reach his top speed.

It was first seen performed by Sonic to save Tails and Old Man Owl from a damaged plane. Sonic also performs it to enter the warp zone to get to Robotropolis with Tails, and during the chase scene with Metal Robotnik. Later Sonic tries to outrun Robot Generator's conveyor belt with Super Peel Out, but manages to get help from Knuckles in the last second. Sonic tries to face Robotnik straight forward, but Hyper Metal Sonic comes between them. Sonic also performs the Super Peel Out move while entering the Ice Cap, during the confrontation between him and Metal Sonic, and finally, at the ending of film as Sonic runs away from the main cast.

In the Sonic the Hedgehog comic series and its spin-offs published by Archie Comics, the Super Peel Out was known as the Figure-Eight Peel-Out. In this media, it was one of Sonic's special moves, which he has used at various points. 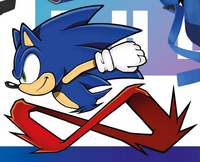 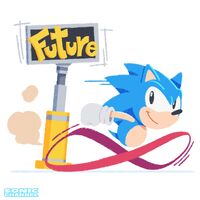 Navigation templates to Super Peel Out
Community content is available under CC-BY-SA unless otherwise noted.
Advertisement