The Sunglasses, from Sonic Adventure 2.

A pair of blue sunglasses.

The Sunglasses are a pair of special sunglasses with light blue glasses and a silver frame. When obtained, they allow Knuckles to see and interact with invisible items, such as Item Boxes, Rings and Springs. They can be used by selecting them in the action window and then pressing the B button, but will be taken them off whenever Knuckles jumps. They are the equivalent to Rouge the Bat's Treasure Scope.

The Sunglasses are located in Meteor Herd. They are found in the middle of the stage (where Knuckles fights Rouge) near the bottom of the lava pit, but the area where they are found is closed up by metal doors and Knuckles has to find a switch to open it up. In order to obtain it, Knuckles must possess the Hammer Gloves.

To find the switch that unlocks the lava pit, the player should head to the opposite side of the structure where Rouge is fought, that Knuckles faces when the player begins the level. Once on the other side, the player must proceed to the nearest platform that has a large meteorite on it and face it so that they have both the meteorite and the large structure directly in front of them. They must then hit the meteorite with as much force as possible, which will cause it to fly into a door on the structure and destroy it. It will then reveal a iron crater that coveres the switch, which must be smashed to fully reveal the switch.

Once the player touches this switch, the door sealing the lava pit will be open. The player must then go into the lava pit, and the Sunglasses can be found at the lowest platform inside. 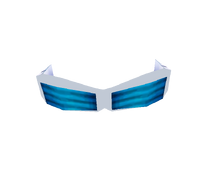