Sonic News Network
Register
Don't have an account?
Sign In
Advertisement
in: Villains, Males, Ghosts, Sonic: Night of the Werehog

Su (スー[1], Sū?) is a character that appears in Sonic: Night of the Werehog. He is a ghost who lives in a haunted house where he competes with Uh to win the affections of Lah. Lah collects photographs of scared people, so the two ghosts compete to scare people that come to their house and then take the best pictures, which they give to Lah to judge.

Sue is a short and fat stereotypical-looking ghost. He wears a red bow tie, and has golden eyes and has black bushy eyebrows. He also has fangs on the bottom of his mouth.

When two children entered their haunted house, Su and Uh scared them and took their pictures, which they presented to Lah. However, Su was broken and rejected when Lah chose Uh's picture over his. As Sonic and Chip entered the house not soon after, the ghosts attempt to scare them and take their photos. They took many pictures of Chip, who was easily scared, and Lah liked them. However, she was left upset because Sonic was not scared in any of the pictures.

Su and Uh promptly went after Sonic, but when he transformed into Sonic the Werehog, Sonic scared the two ghosts off as they accidentally took pictures of themselves. When Lah saw them, she burst into uncontrollable laughter. Their pride now hurt, Su and Uh teamed up to attack Sonic, fusing into Baker. Baker's strength and abilities made short work of Sonic the Werehog, even after Sonic tried to exploit Baker's inability to appear invisible in photos. Eventually, Baker knocked Sonic out and was about to take his picture when Su and Uh began to fight over who would take it, causing Baker to separate. Waking up, Sonic attacked Su and Uh, spinning them around the house before sending them flying through the glass roof of their house with a powerful punch.

When Lah saw Sonic the Werehog, she instantly fell in love with him, so she had Su and Uh kidnap Chip so that she could disguise herself as Chip and follow Sonic, much to the heartbroken Su's dismay.

Su is deeply in love with Lah and determined to win her affection. Su’s love for Lah leads him to perform immoral actions, such as scaring innocent children for Lah’s amusement and helping kidnap Chip because Lah asked him to, though he seemed to show some guilt for the latter. Su also has a strong rivalry with fellow ghost photographer Uh, and the two constantly compete for Lah’s attention. However, Su does seem to care about Uh’s wellbeing, as seen when he grabbed Uh’s hand and pulled him along to save him when fleeing from Sonic the Werehog. Also, despite their rivalry, Su is willing to work together with Uh to defeat a common enemy, such as when they team up to fight Sonic the Werehog. Su is very vengeful when angered, attacking and mocking Sonic the Werehog as revenge for humiliating him and causing Lah to laugh at him. He is also cowardly, immediately panicking and flying away when faced by Sonic’s Werehog form. Su also has a sensitive side, being hurt when Lah laughed at him and growing heartbroken when he saw her fall in love with the Werehog. 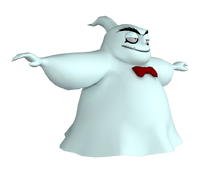