A Strange Relief, from Sonic the Hedgehog 4: Episode II.

An arrow-spitting face. Were these built by Dr. Eggman or the Ancients?

The Strange Relief,[1] also known as the Relief[2] (レリーフ[3], Rerifu?) or the Arrow-Shooting Head,[4] is a gimmick/obstacle that appears in the Sonic the Hedgehog series. It is a wall-mounted stone statue that shoots arrows.

In gameplay, Strange Reliefs fire fast-moving arrows in whatever linear horizontal direction they are facing. Making contact with these arrows will inflict damage on the playable character.

In gameplay, when the playable character gets in its sight, the Strange Relief starts shooting its arrows from its mouth every couple of seconds. In order to progress along the route the Strange Relief is on, the player has to hit the flashing red gem on the Strange Relief's forehead three times. Doing so will make one of two things happen: a rock hatch (usually below the relief) will open or a small piece of the level structure will rise up to a point where the player can continue through the Act. Meanwhile, a Strange Relief with a broken forehead gem becomes inactive.

When playing as Knuckles in Sonic the Hedgehog 3 & Knuckles, Marble Garden Zone Act 2 will include one Strange Relief at the end of the Act that Knuckles cannot reach due to his short jumping height. The side pillars in the room with this Strange Relief are also breakable, meaning that if the player attempts to climb on them, they will crumble. In order to get around this Strange Relief, the player must backtrack until they comes across a wooden sign with an arrow pointing upward, which indicates an exclusive route that Knuckles can reach.

In Sonic the Hedgehog 4: Episode II, Strange Reliefs appear in Sylvania Castle Zone Act 2. In gameplay, their attack pattern resembles their original one, albeit more predictable, as they have to open their mouths to shoot arrows each time. The player should avoid standing right next to a Strange Relief while it opens its mouth as well, as the large arrows they load to fire can already damage the playable character before they even shoot them from their mouths. The Strange Reliefs themself are also invincible, as hitting their gems does not effect their behavior, meaning the player can only avoid their attacks.

In Sylvania Castle Zone Act 2, Strange Reliefs are also placed on walls, ceilings and floors as aeration blowers in underwater sections. Here, the constant water flow made by a Strange Relief forces the playable characters to be guided through an underwater passage. After reaching to the new section in the Act, the player is unable to backtrack on these passages, as the water flow keeps pushing the playable character back.

In the Sonic the Comic comic series and its spin-offs published by Fleetway Editions, the Strange Relief is one of traps found on the Floating Island, and is meant to ward off intruders. Sonic accidentally triggered a Strange Relief's trap during a trip to the island, but he managed to avoid the arrow thanks to Tails' warning and it was subsequently destroyed. 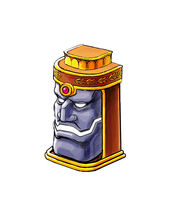