A forward strike with Charmy's stinger.

The Sting Attack (針攻撃, Hari kōgeki?, lit. "Needle Attack") is a Fly Formation maneuver used by Charmy Bee on Team Chaotix in Sonic Heroes. When using this move, Charmy attacks his foes with his stinger.

When using the Sting Attack, Charmy points his natural stinger out in front of him and delivers a quick, vicious sting to the opponents directly ahead. While doing so, Charmy is surrounded by a red aura.

To perform Sting Attack in gameplay, Team Chaotix must be in Fly Formation. The player then has to press 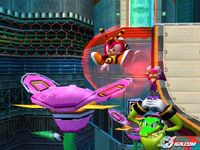