A Steelion, from Sonic the Hedgehog 4: Episode II.

In Sonic the Hedgehog 4: Episode II, the Steelions appear as enemies. They are only encountered in the underwater areas of White Park Zone Act 3. 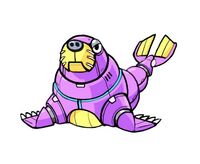