Sonic in Stardust Speedway, from the 2011 remaster of Sonic the Hedgehog CD.

A city filled with many loops and speedways.

Little Planet, near Palmtree Panic and the Wacky Workbench

Shoot through a maze of valves and pipes in a world of stardust and music, mind-boggling speed... and danger. Wipe out lightning bugs before they catch you in their currents. Look for certain ways to open passageways and bypass springs. Watch your step!

Stardust Speedway (星くずのサーキット[2], Hoshikuzu no Sākitto?, lit. "Stardust Circuit") is the sixth Round in Sonic the Hedgehog CD. It consists of a city region full of lights and colors, located on Little Planet. As with the other Rounds in the game, Stardust Speedway consists of two Zones and a third, shorter Zone that features the Round's boss.

In the present timeline, Stardust Speedway is a highway adorned with brass instruments above an enormous city, which glows with many lights during mid-night. A statue of Dr. Robotnik can be seen undergoing construction in Zone 2, with girders and incomplete sections.

In the past, Stardust Speedway's background features a Roman/Greek-style city, complete with an acropolis and surrounding towns. The night sky is not as bright as it is in the present due to the lack of technology, but some stars can still be seen. The Zone is mainly entangled by vines as well. It also has a Gothic-styled building in the center of Zone 2.

In the bad future, Stardust Speedway has become a corrupted, polluted dystopian city underneath a large electrical storm with a completed statue of Dr. Robotnik in the center of Zone 2. The roads and instruments have become rusty and discolored, and no stars can be seen at all.

The good future, Stardust Speedway is a giant amusement park, with bright pink and green colors dominating the landscape. It looks upon a vast bay with bright cities in the distance, and the Dr. Robotnik statue has been replaced by a giant glowing castle in Zone 2.

Having invaded Little Planet, which includes Stardust Speedway, Dr. Robotnik would install robot teleporters in the past and infest the region with Badniks. He would also put up some Metal Sonic holograms to terrorize the Animals that live there. Using these elements, Robotnik managed to conquer the future of the planet and rewrite history in his own image. As such, Stardust Speedway's city would be ruined as a result of the constant storms there caused by the pollution on the planet in the future.

After Sonic the Hedgehog arrives in the region, he manages to re-write Stardust Speedway's history and revert Robotnik's effects in the region, thereby turning Stardust Speedway into an amusement park. In the meantime, Sonic comes across his robotic doppelganger and Robotnik's newest henchbot: Metal Sonic. With Robotnik arriving on the scene in his Egg Mobile immediately after, Metal Sonic challenges Sonic to a race, which Sonic readily engages in with his new rival. As they race, Metal Sonic pulls out all the stops while Robotnik tries to fry those that fall too far behind. Ultimately though, Sonic crosses the finish line first, and Metal Sonic crashes into the wall that closes up behind Sonic as he crosses the finish line, leaving Metal Sonic in pieces. At the finish line, Sonic also finds Amy Rose tied to a mast, and Sonic promptly frees Amy before proceeding to Metallic Madness.

The boss of Stardust Speedway is Metal Sonic, Sonic's robotic copy, who has to be beaten in a race. Dr. Robotnik will appear in his Egg Mobile throughout said race, shooting a deadly laser that will kill the player instantly. Metal Sonic will also use some attacks against Sonic. The objective of the battle is to reach the goal of the race, this being a room with Amy Rose inside of it, before Metal Sonic does. 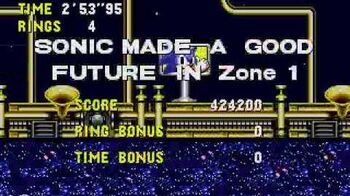