This article is about the video game location. For other uses, see Stardust Speedway (disambiguation).

Stardust Speedway as it appears in Sonic Generations.

Stardust Speedway (星くずのサーキット[1], Hoshikuzu no sākitto?, lit. "Stardust circuit") is a location that appears in the Sonic the Hedgehog series. It is an urbanic region on Little Planet that was once conquered by the evil Dr. Eggman when the planet arrived on earth, but was eventually freed. It is best known for being the site of the first clash between Sonic the Hedgehog and Metal Sonic.

Stardust Speedway is a city located in Little Planet, between Palmtree Panic and the Wacky Workbench. It is notable for its light colors during night. Numerous golden highways adorned with instruments, signs, gimmicks, and Time Warp signs, are also into the city, while some gorgeous buildings and lights are seen in the background. What appears to be a factory under construction is seen below those highways. Somewhere in the city, a Dr. Eggman-themed statue can be seen.

In the past, it used to be a Greek/Roman-styled city with vines in the highways near to what appears to be a lake. It also used to have a palace in the same place where the Eggman-styled statue is currently located.

When Dr. Eggman re-wrote the future to his own image, the city was the same as in the present, but it was polluted, ruined and full of crime, while some red storms were constantly destroying the place. The highways seemed to be rusted and their instruments were almost completely destroyed. Also, the statue was now totally finished. A grey amusement park also appeared here, but it didn't seem to be working. After Sonic the Hedgehog re-wrote history, Stardust Speedway was no longer a city, but an amusement park, as far as the eye can see, in a bay full of lights, colors and attractions, where fun and leisure dominated the place. The statue has also been replaced by a cathedral/castle that suited with the rest of the park.

Stardust Speedway once used to be a Greek/Roman-styled city near a lake. Over time however, it was turned into a modern and colorful city.

In Sonic the Hedgehog CD, Dr. Robotnik invaded Little Planet and its regions, which included Stardust Speedway. He installed robot teleporters in the past and infested the city with Badniks. He also put some Metal Sonic Projectors to terrorize the animals that lived there. With this, he managed to conquer the future of the planet and write history to his own image. In Stardust Speedway's case, however, the city ended being ruined as a result of the constant storms there caused by the pollution in the planet.

When Sonic the Hedgehog arrived into the planet, he started to get the Time Stones and re-write history in Little Planet, reverting Robotnik's effects in Stardust Speedway. After Metal Sonic kidnapped Amy Rose in Collision Chaos, Robotnik left her tied somewhere in the highways, and waited for Sonic to show himself up to rescue the girl. After Sonic arrived, fixing the future and turning it into a amusement park, Metal Sonic challenged Sonic to a race, with Amy being the end of it. The hedgehog won, destroying Metal Sonic and freeing Amy. The hedgehogs later left Stardust Speedway to defeat Robotnik in Metallic Madness. After this, Little Planet was definitely freed from Robotnik's control, leaving Stardust Speedway to have a peaceful destiny.

In the console/PC version of Sonic Generations, using the Time Eater, Modern Eggman restored Stardust Speedway, leaving it in its ruined state again and under his control. There, Classic Metal Sonic challenged Classic Sonic to a battle. After the hedgehog won, the robot gave him a Chaos Emerald.

After the Time Eater was destroyed, Stardust Speedway was presumably restored to its "good future" state.

In Sonic the Hedgehog 4: Episode Metal, a monitor from Dr. Eggman was taken to Stardust Speedway to reactivate a not-working Metal Sonic. After the doctor succeed, he told him to return to the earth, where he would repair him. No explanation has been given of why does Stardust Speedway appear in its "bad future" state in this game.

After the Super Genesis Wave rewrote reality, Stardust Speedway became much more similar to its game counterpart, being a Zone under Dr. Eggman's influence on Little Planet and having the same role it had in the games. 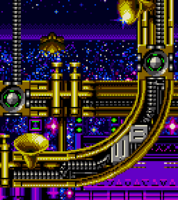 Stardust Speedway's icon in the Time Attack mode of Sonic the Hedgehog CD. 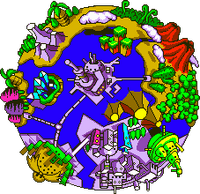 Stardust Speedway (bottom left) shown along with other Little Planet locations in the present. 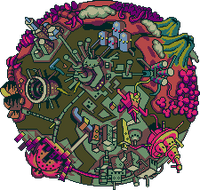 Stardust Speedway (bottom left) shown along with other Little Planet locations in the bad future. 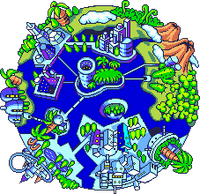 Stardust Speedway (bottom left) shown along with other Little Planet locations in the good future.
Add a photo to this gallery

Sonic the Hedgehog CD (2011)
Add a photo to this gallery 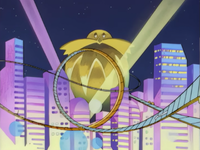 Sonic the Hedgehog 4: Episode Metal
Add a photo to this gallery