Stalkers look like Biters, except for their purple glow. Stalkers are stronger than their ﬁery counterparts and have an additional attack: Laser Breath. When the Stalker rears up and opens its mouth, look out for a charged energy beam that sweeps left and right.

The Stalker is an enemy that appears in Sonic the Hedgehog (2006). It is a stronger and darker variant of the Iblis Biter conjured up by Iblis.

The Stalkers are identical to Iblis Biters, but have a different color scheme. They are lizard-like creatures made entirely of what appears to be purple and white lava. They have hardened armor on their head, back and limbs. Their head armor in particular resembles a shark fin.

In gameplay, Stalkers appear by bursting out of the ground and creating a short shockwave that causes damage. They move along the ground and walls where they keep a lookout for the player. When they spot a playable character, their most common attack is crawling towards them in a zigzag direction to evade attacks before jumping at the player. They can also shoot a short-ranged laser, which they sweep left and right for about three seconds. Slightly stronger than the Iblis Biters, the Stalkers each take two hits to be destroyed.

Much like Iblis' minions, the Stalkers are completely mindless and only exist to cause destruction wherever they are. 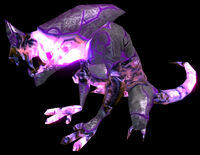