The Egg Mobile equipped with a retractable spike on its underside. Requires to hit eight times to defeat it.

The Spring Yard Zone boss is the third boss in the original 16-bit version of Sonic the Hedgehog, where it can be found at the end of Spring Yard Zone Act 3. Sonic needs to hit it eight times to defeat it. The Egg Mobile, piloted by Dr. Robotnik, is equipped with a large retractable spike on its underside.

The boss battle takes place on a walkway made of ten destructible brown blocks. After Sonic crosses a large bottomless pit and comes to the arena, Dr. Robotnik also arrives and uses the Eggmobile to quickly descend on Sonic, intending to impale him on the spike. If the player avoids this attack, the spike will instead lift up and shatter the block that he was once standing on. The holes thus created spell instant death for Sonic, who can fall through them. When Dr. Robotnik attacks on the same spot that has a hole on it, he only descends and then ascends to float in the air.

However if the player keeps going too long on the battle, Dr. Robotnik may be able to create large hole, where the player is unable to jump over. Due of this, this battle can be slightly tricky, as the player has to patiently progress in the battle to take him down.

Dr. Robotnik can be struck when he descends to impale Sonic or, with proper timing, when his mobile wavers in the air. Like in other bosses, doing eight hits into the mobile will defeat Dr. Robotnik again. After this, the player can open the Capsule and head to the next zone.

The Spring Yard Zone boss has also made a small appearance in Sonic the Hedgehog Story Comic Volume 2, where it is illustrated as similar like in the game, but instead of facing it at Spring Yard Zone, Sonic faces him at Star Light Zone (miscalled as Star Land Zone). When Sonic manages to take down Orbinaut easily and gets close to the capsule where his animal friends are hold in prison, Eggman arrives with his mobile and tries quickly crush him with spike equipment. However as Eggman's Mobile gets easily stuck, Sonic gets change to do Spin Attack on him and defeat him easily. After Eggman escapes, Sonic opens the capsule and saves the day.

The Spring Yard Zone boss appeared in the Sonic X comics published by Archie Comics at a virtual reality which simulated the original Sonic the Hedgehog where it was piloted by a fake Eggman at Spring Yard Zone. He engaged Sonic, Knuckles and Amy. Although Knuckles got knocked out by Eggman's spike, Sonic and Amy managed to carry Knuckles to safety just before the block the heroes were standing on got destroyed. Sonic passed a couple of Rings to Knuckles and together, the three heroes attacked and defeat Eggman quickly, causing the doctor to retreat once again.[1] 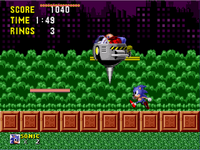 Sonic the Hedgehog (1991)
Add a photo to this gallery