The Spring Beetle[1] (スプリングビートル, Supuringubītoru?) is a robot deployed by the military organization Guardian Units of Nations, and a part of the Beetle series. It appears in Sonic Adventure 2 and Sonic Adventure 2: Battle.

The Spring Beetle greatly resembles a Mono Beetle, except for a few key differences. Instead of having a dish attached to its back and a cap on its top, it has a spring built into its top. Also, on the bottom of it, it has two jets that allow it to move 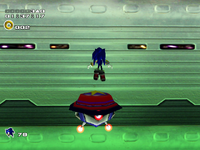 As its name would suggest, the Spring beetles is equipped with a spring that can be used to reach higher places, like a normal spring. Because of the spring attached to it and its position in stages, all normal attacks that the player uses at the Spring Beetle will bounce off it. The only way to defeat it is to use the Light Speed Attack. Upon its destruction, it awards the player one hundred points. It can be found in the following stages:

Spring Beetles do not have any form of attack and can instead be found either hovering in a single place or moving a set distance vertically.