The Spiral Upper (スパイラルアッパー, Supairaruappā?), or Spiral Uppercut,[1] is a recurring move in the Sonic the Hedgehog series. It is one of Knuckles the Echidna's signature moves where he performs a flaming uppercut, and a variant of the Punch Attack. It is the equivalent to Rouge the Bat's Screw Kick.

When performing the Spiral Upper, Knuckles shoots himself directly into the air. As he spins around, he delivers a powerful uppercut to the enemy above, dealing damage. Often, Knuckles strikes with such force behind his blow that his fist catches on fire.

The Spiral Upper first appeared in Sonic Adventure 2 and its remake, Sonic Adventure 2: Battle. In these games, Knuckles moves with such speed when performing this move that he leaves afterimages.

To use the Spiral Upper in gameplay, the player must rotate the control stick in a 360-degree angle and then press

. In addition, Knuckles can enhance the Spiral Upper with the Hammer Gloves, allowing it to break Steel Containers.

In gameplay, the Spiral Upper is useful for reaching areas above that are otherwise difficult to get to and avoiding falling into gaps. In addition, it will not cancel the momentum Knuckles receives from the Boost Mode. Unlike most other Big Air maneuvers, the Spiral Upper also lets Knuckles damage foes in his flight path, although he will stop moving when he lands after using it.

To perform the Spiral Upper in gameplay, the player must press up on

and the R Button at the same time after being launched into midair by gimmicks such as the Spring and Ramp.

while on the ground.

In the Sonic the Hedgehog comic series and its spin-offs published by Archie Comics, Knuckles has performed the Spiral Upper a couple of times. In this media, it resembles the Spiral Upper from Sonic Adventure 2 and Sonic Advance 3. He first used this move against Bark the Polar Bear in the Chaos Emerald Championship. 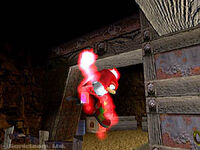 The Spiral Upper during the early development of Sonic Adventure 2