The Spin Dash is a move that appears in the Sonic Boom series. It is one of Sonic the Hedgehog's signature techniques where Sonic blasts forward with a revved-up a spin attack.

When performing the Spin Dash, Sonic typically crouches down and curls into a ball where he starts performing an oval-shaped charge by spinning around in one place. Once charged up, Sonic dashes forward and homes in on his targets with his spin attack. Alternatively, Sonic can skip the revving and launch straight into the spin attack.[1] Because of its reliance on the spin attack though, the Spin Dash cannot be executed properly if the user's legs are injured.[1]

In Sonic Boom: Rise of Lyric, the Spin Dash is one of Sonic's character-exclusive moves. The move has multiple uses: it can be applied for battle to ram opponents to deal damage to them or deal continuously damage to stationary opponents. The player can also use it to perform a series of quick hits on a given opponent: after hitting an opponent with the Spin Dash, Sonic will bounce slightly backward and then attack with the same charge again several times in a row. It can also provide Sonic with brief dashes to get around faster, smash breakable obstacles, and be used in conjunction with gimmicks like the Spin Ramp and the Spin Ball.

To use the Spin Dash in gameplay, the player must hold

to rev the Spin Dash and then release the button to make Sonic charge forward. The longer the button is held, the further will Sonic travel with the move. After charging for some time however, it will automatically charge itself.

In Sonic Boom: Shattered Crystal, the Spin Dash is a move exclusive to Sonic. To perform this move in gameplay, the player must hold

to rev the Spin Dash and then release it to make Sonic charge forward. In terms of utility, it can be used to break through containers and charge through non-shielded enemies. It can also instantly destroys more durable enemies who would otherwise need to be dealt two regular hits to be destroyed.

In Sonic Boom: Fire & Ice, the Spin Dash returns as one of Sonic's character-exclusive moves and its mechanics and effects are the same as in the previous game. Like in Sonic Boom: Shattered Crystal, to use the move in gameplay, the player must hold

to rev the Spin Dash and then release it to make Sonic charge forward. With this move, Sonic can move faster than when Sprinting. 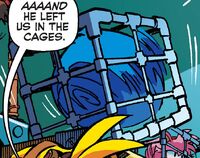 Sonic using the Spin Dash in the Archie Comics.