Spiketower[1] (ザック[2], Zakku?) is an enemy that appears in Knuckles' Chaotix. It is a mass-produced Badnik model created by Dr. Robotnik.

The Spiketowers only appear in Botanic Base. In gameplay, the spikes on their heads only serve as their defense; they can fire them straight upwards like grappling hooks and make them wedge their projectiles into the ceiling. They can then winch themselves upwards on wires, allowing them to swing back and forth like pendulums to hit the playable characters. Although this adaptation of their weapon is rather novel, these Badniks are not all that dangerous as they swing radius is rather limited.

To destroy a Spiketower, the player simply has to hit it with a Spin Jump while it is on the ground or swinging around in midair. Like many of the Badniks in the game, Spiketowers are powered by synthesized Rings which they drop upon defeat. 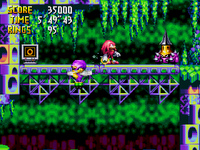 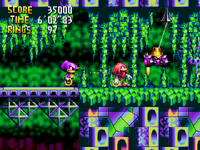 Knuckles' Chaotix
Add a photo to this gallery