For the badnik in Sonic 4, see Spikes (Sonic 4). For the Wisp power in Sonic Colors, see Pink Spikes.

Template:Character Spikes, known in Japan as Yadrin (ヤドリン, Yadorin?), are a crab-type badnik created by Doctor Robotnik, which make their first appearance in the original Sonic the Hedgehog.

Spikes badniks first appear in the original 16-bit version of Sonic the Hedgehog, where it can be found only at Spring Yard Zone. It will usually be on platforms by giant maces without chains. These badniks can be a small threat, because some players will try to jump on it by its eyes. Spikes can only be defeated with a Spin Attack.

Spikes also appear in 8-bit version of the game with same name, and this time it can be found at Bridge Zone. Spikes act like they did in 16-bit counterpart and again the best way to defeat them is to roll into it.

Many years later Spikes make their reappearance in 2012 remake of Sonic Jump as it can be found at Jungle Zone. Spikes act like they did in their first appearance, moving back and forth on platforms, but can fall from the sky to the player's neck in several sections. Spikes can be easily defeated by doing Spin Jump under of them.

Spikes resembles a hermit crab with two claws that help it crawl along the ground. Spikes has pink shell which has five spikes on it. It's mouth part is colored yellow which has two eyes balls which are connected to the body via cables. It has grey wheels, which make these badniks able to move.

The badnik is similar to Motobug when it comes to its pattern. The only difference is that Spikes has a shell covered with spikes. The spikes can injure Sonic if he attacks it from above.

The toy company TOMY has released a Spikes action figurine during the release of Sonic & Knuckles. The series includes 21 Sonic figurines and these figurines came in packs of four under the Sonic & Knuckles label. They were also released individually under a Sonic the Hedgehog label. 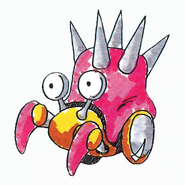 Sonic the Hedgehog (16-bit)
Add a photo to this gallery

Sonic the Hedgehog (16-bit)
Add a photo to this gallery

Retrieved from "https://sonic.fandom.com/wiki/Spikes_(Badnik)?oldid=863848"
Community content is available under CC-BY-SA unless otherwise noted.