This article is about mass produced Badniks. For other uses of the term, see Spikes (disambiguation).

A Spikes in Sonic Lost World.

A Hermit crab type robot which has been newly developed for cold regions. The spines on its hard shell will repel any attacks done by Sonic alone. There must be another way to defeat it...

The Spikes (ヤドリン, Yadorin?, lit. "Yadrin"),[1][2] is a recurring enemy in the Sonic the Hedgehog series. They are pink crab-based Badnik models created by Dr. Eggman with spikes on their body.

The Spikes resembles a hermit crab with two claws that help it along the ground. It has a pink shell with five spikes on it, a yellow snail-like head and two large eyes on thin eyestalks. They also have a pair of gray wheels on their shells to move back and forth with. Originally, they had the basic black eyes with white sclera, but in Sonic Lost World they got cyan eyed.

In Sonic the Hedgehog 4: Episode II, the Spikes had a more modernized and technological design. In addition to a getting a more realistic gastropod shell, they received three rows of spikes on they shell. Their head also became smaller, their eyes lost their eyestalks, and they got four extra legs in exchange for their wheels. Additionally, their body became pink with a white underbelly and their shell became blue with pink outlines.

Spikes first appeared in the original 16-bit version of Sonic the Hedgehog, where they only appear in Spring Yard Zone. They will usually be on platforms with Spiked balls. These Badniks can be a small threat, since any attacked launched on them from above are futile. Spikes are best defeated with a Spin Attack.

Spikes also appear in 8-bit version of the game with same name, and this time it can be found at Bridge Zone. Spikes act like they did in 16-bit counterpart and again the best way to defeat them is to roll into it.

In Sonic The Hedgehog 4: Episode II, the Spikes appeared with a new design, accordingly to fit in colder climates. In this game, they appear exclusively in White Park Zone.

Unlike in earlier games, the Spikes cannot be defeated with a Spin Attack or Spin Dash because its spikes its whole shell. There are three ways to destroy it: crushing it with a snowball, rolling over it with the Rolling Combo, or go near the Spikes which will cause it to go inside its shell along with its spikes, allowing the player to destroy it. If a Spikes is destroyed by a snowball though, the player will not be awarded with any points.

In the 2012 version of Sonic Jump, Spikes can be found in Jungle Zone. Spikes behave like they did in their previous appearances, moving back and forth on platforms, but can also fall down on the player from above in several sections. They can be defeated easily by hitting them with a Spin Jump from below.

In Sonic Dash, the Spikes returned with new tank treads for movement and must be destroyed with a roll to avoid damage. They also had their design from Sonic the Hedgehog 4: Episode II.

In Wii U version of Sonic Lost World, Spikes appear in Tropical Coast Zone 4. During the game, it turns out that the Badniks, including the Spikes, got hijacked by the Deadly Six. Only two Spikes appear in the Zone, where are moving on ceilings. If the player runs below them, they will fire their spikes from their shells which can inflict damage.

The Spikes are similar to Moto Bug when it comes to their attack pattern. The only difference is that Spikes have a shell covered with spikes. These spikes can injure the victims should they attack it from above. In Sonic Lost World, they can launch their spikes from their shells.

In the Sonic the Comic series published by Fleetway Editions, the Spikes are a part of Dr. Robotnik's Badnik army and are among the first generation of Badniks the doctor produced. Depending on the artist, the Spikes' coloration has been altered slightly each times.

The toy company TOMY has released a Spikes action figurine during the release of Sonic & Knuckles. The series includes 21 Sonic figurines and these figurines came in packs of four under the Sonic & Knuckles label. They were also released individually under a Sonic the Hedgehog label. 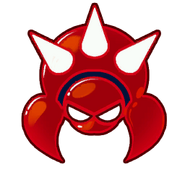 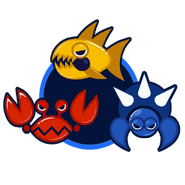 Sonic Dash
Add a photo to this gallery

Retrieved from "https://sonic.fandom.com/wiki/Spikes_(Badnik)?oldid=1912295"
Community content is available under CC-BY-SA unless otherwise noted.