Not to be confused with Spiker (Sonic the Hedgehog 2).

Its springy “spikes” are bouncy but harmless; its shots, not so much.

The Spiker is disguised as a generic set of spikes, except that its lower half has an orange body with eyes and cannons on its sides.

Spikers can only be encountered in Marble Garden Zone, where they hide their bodies in the ground while their spikes stick out, making them appear as normal spikes. However, they have a slight visual difference from real spikes when the player is not near, making them easy to detect.

When the player comes near a Spiker, it will shoot out from the ground, revealing its entire body, and proceed to shoot bullets, one from the left and one from the right. These projectiles can be deflected by any of the three shields available in the game. It will then return to its original state, appearing as regular spikes.

Surprisingly, the spikes on the Spikers do not inflict damage. Instead, jumping on them makes the playable character bounce into the air, similar to a Spring. To defeat the Spikers, the player can Spin Dash or Spin Attack them from the sides.

In the Sonic the Comic series published by Fleetway Editions, the Spiker is a part of Dr. Robotnik's Badnik army and they are among the third generation of Badniks the doctor produced. Depending on the artist, the Spiker's coloration has been altered slightly each time. 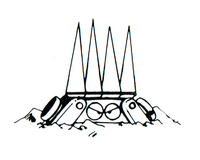