Not to be confused with Spiker (Sonic the Hedgehog 3).

A Spiker, from the Wii U version of Sonic Lost World.

After launching its spiked top, it scuttles around in a panic

The Spiker[1] (ツンツン[2], Tsun-tsun?) is an enemy that appears in the Sonic the Hedgehog series. It is a mass-produced Badnik model created by Dr. Eggman which can fire its spiky cone at foes.

The Spiker's main body appears to be a simple, red round ball which is almost identical looking in comparison to the Gohlas'. The Spikers also have yellow spider-like leg walkers on the bottom of their body and they wear a headgear on their heads that is a large spiky cone. In Sonic Lost World, they have small antennae on their orb-shaped body and cyan colored eyes.

The first appearance of this Badnik was in Sonic the Hedgehog 2 (16-bit), where it served as an enemy. This time around, this Badnik is referred to as Spiker[1] (ツンツン[2], Tsun-tsun?). In this game, the player encounters them in the volcanic caverns of the Hill Top Zone.

In gameplay, these enemies are often found walking along the ground, although they can also be seen walking on the ceiling of the caves. Regardless of its location, its attack is the same - As the playable character approaches a Spiker, it fires its cone upwards if it is on the ground, or downward if it is on the ceiling. The cone is easy to dodge and once it has been fired, the Spiker will be mostly harmless and easily destroyed with basically any attack. Also, upon their destruction, they release an Animal.

In the Wii U version and PC version of Sonic Lost World, Spikers appear as enemies. During the game, Dr. Eggman's Badniks, including the Spikers, got hijacked by the Deadly Six.

Spikers are found in the 2.5D sections of Tropical Coast Zone 4, while in Speed Race mode of the game, they are also featured in Windy Hill Zone 3. In gameplay, they have the same attack pattern from Sonic the Hedgehog 2 (16-bit) but now they are able to fire their spiky cones much faster than in the previous game, which can be more tricky to bypass. The player can then simply destroy this Badnik after it loses its spiky cone. Also, upon their destruction, they release an Animal.

The Spikers' main weapon are the large spiky cones on top of their head. When an enemy is in close proximity, they can fire their spiky cones through mid-air at the opponent, both upward and downward. They are also excellent climbers, being able to hang effortlessly from the ceilings.

Spiker is also seen in Sonic the Hedgehog Yearbook 1992 story "Space-Hedgehog" as one of two Badniks with Rexon to threat Sonic the Hedgehog and is firing its cone directly at him. It is then seen holding the frozen Sonic out of a hole, but gets later destroyed by Sonic after getting free and using Spin Attack. 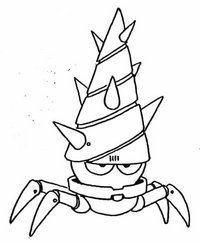