A Spikebonker, from Sonic & Knuckles.

Spikebonker[1] (ガーディ[2], Gādi?, lit. "Guardy") is an enemy that appears in the Sonic the Hedgehog series. It is a mass-produced Badnik model created by Dr. Robotnik.

Resembling cones, the Spikebonkers have an orange top cap with a black cylinder section below. Placed below their orange cap on their black underside are also two glaring eyes. On their bottom, they have a grey drill as well. They also carry an engine pack on their back and have a mace ball orbiting their lower section.

Spikebonkers appear only in Death Egg Zone, where they hover slowly from side-to-side with their mace orbiting them. When Sonic or Tails approaches, the Spikebonkers attack by sending their mace flying towards them. However, the mace has a limited range and will return to its Spikebonker like a boomerang. The Spikebonkers will repeat this pattern until they are destroyed or the player gets far enough away.

With the right timing, the player can defeat a Spikebonker with a Spin Jump. However, the player has to take notice of their mace's movements while attacking, as it can easily harm the player upon its return trip.

In the Sonic the Comic series published by Fleetway Editions, the Spikebonkers served as the Death Egg II's security system. Sonic battled them when he infiltrated the Death Egg. 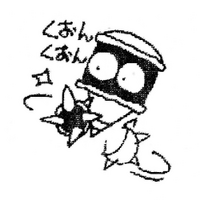