For the enemy in Sonic Unleashed see, Spike (Dark Gaia's Minions). For the G.U.N. trooper from the Archie Comics, see Spike (Archie).

C'mon, squirt, let's see what you're made of. Forget those rivet-brains you've seen. I'm Spike and I'm gonna stick it to ya!

Spike is the ninth competitor in Dr. Robotnik's Mean Bean Machine, who also makes a minor cameo in Adventures of Sonic the Hedgehog being seen in the crowd booing along with Sonic. He is a straightforward rebellious yellow Badnik who seems to have obsessions with spikes and insults fellow Badniks. 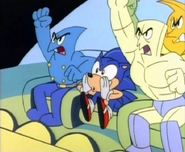 Spike in Dr.Robotnik's mean bean machine
Add a photo to this gallery