Sonic using Speed Up against Shadow.

A move for supporting running speed.

Speed Up is an ability that appears in the Sonic the Hedgehog series. When utilizing this ability, the user increases their speed.

Speed Up can only be performed in the games' two-player mode. To use it, the player must press

In the console/PC version of Sonic Generations, Speed Up appears as an equipable Skill for Modern Sonic. Like in Sonic Adventure 2, it increases Sonic's overall speed, but it now passively affects his maximum speed for as long as the Skill is equipped, rather than giving the user a short burst of speed upon use.

To unlock Speed Up, the player can buy it at the Skill Shop from the beginning of the game for 300 Shop Points. It can only be equipped to Modern Sonic and costs twenty Skill Points to be equipped. 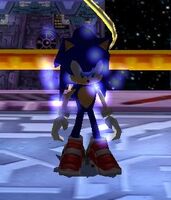