Speed Highway, from the console/PC version of Sonic Generations.

Speed Highway (スピードハイウェイ, Supīdo Haiwei?) is the fourth Stage in the console/PC version of Sonic Generations. It is a re-imagination of Speed Highway from Sonic Adventure, and part of the Dreamcast Era.

Modeled after the original Action Stage, Speed Highway is an urban setting in Station Square. The background consists of many tall skyscrapers and other large buildings underneath a nighttime sky littered with stars. Other decorations include helicopters, signs with arrows, and billboards promoting different products. The platforms here are large streets high above the ground, with decorations that differ depending on the Act. In Act 1, they have white lines and short concrete walls on the sides with red and yellow lines. In Act 2 on the other hand, they have white arrows on their surfaces indicating the direction that the player has to go in, and short concrete walls with yellow and black warning signs.

At one point during both Acts of Speed Highway, the playable character will enter a hotel-like building with beige walls with a horizontal, crimson line at the top and bottom; yellow fences; white lights, and some decorations in the form of plants, paintings, red carpets, and chairs. Also, at the end of Act 2, the sky will turn a white and beige-ish color with large blue clouds covering it.

A version of Speed Highway from somewhere in spacetime would be sent to White Space by the Time Eater, devoid of any color and life. This would be the fourth area Classic and Modern Sonic pay a visit to after ending up in White Space. By speeding through Speed Highway, the Sonics are able to fix space, thereby restoring the area and, by extension, Cream and Cheese, from the lifeless states they had been put in by the Time Eater.

Much like the original Action Stage, Speed Highway is a very fast-paced stage, with a mostly linear level design. Both Acts feature the same gimmicks seen in the original Speed Highway, with the addition of balloons. 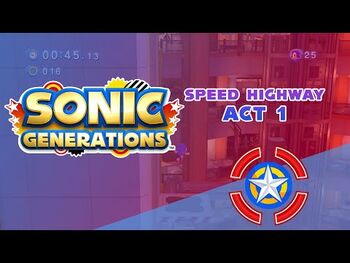 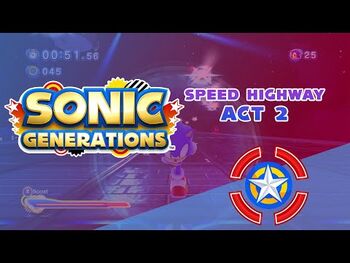