A massive set of highways and roads high in the sky.

Speed Highway is an urban setting in Station Square. As Sonic and Tails, it is acceded through an elevator in a Cyber-Net Inc. building; while as Knuckles, it can be entered from the courtyard. The background consists of many tall skyscrapers and other large buildings underneath a nighttime sky littered with stars. The platforms here are large streets high above the ground.

While trying to find Amy and Birdie, who had been caught by ZERO, Sonic goes to Speed Highway. However, he does not find any signs of them there.

When Dr. Eggman goes to Speed Highway to activate a missile with which he can destroy all of Station Square, Tails follows him and races against him. In the end, the doctor loses to the fox cub.

During his mission to recover the Master Emerald shards, Knuckles goes to Speed Highway. There, he is able to successfully locate and get three shards.

In Sonic's first portion of the Action Stage, and in Tails' version of it, Speed Highway is a very fast-paced, albeit linear Action Stage. Though it features little to none alternate paths, it makes up for various secrets that can be found by skillfully jumping over the buildings. Unlike other Action Stages, which have a lot of ground to run over, Speed Highway takes place over linear roads which the player has to run across, usually with the aid of Dash Panels. However, due to the speed, running over these roads can be somewhat of a hassle, as the playable character can fall down them and into a bottomless pit.

Various common gimmicks featured in these versions of Speed Highway include rockets, which can be used to go from one part of the map to the other; chained iron balls; and yellow contraptions that, with enough speed, can send the playable character to the highway above them. Less common gimmicks include helicopters, which are similar to the rockets; and Hanging Bells, which, when jumped over, drop some Rings. In addition, some sections of the Action Stage feature platforms that move across a beam when the character steps on them; if brave enough, the player can run over the beam themselves, though this may be very risky. Also, the emphasis on speed is taken advantage of in some parts where the player has to run across walls; if done successfully, the character can get some Item Boxes and reach shortcuts.

In Sonic's second portion of Speed Highway, he is automatically running down a giant building. In this section, the player can jump and move left or right. Aside from Item Boxes, there are various small roadblocks that, when touched, slow Sonic down for a second. To avoid them, the player has to simply move aside or jump over them. In addition, near the end, there are also various horizontal pillars. These can only be avoided by moving to the sides, though touching them does not slow Sonic down or damage him.

Sonic's third portion of Speed Highway, and Knuckles' version of it, is a more relaxed Action Stage that is much slower than previous sections. Here, the player runs on the streets of Station Square. On the way however are cars, which, when touched from the front or, with enough speed, from the other sides, damages the character. The player can also run over to the buildings. Near the end of the stage as Sonic, or at the start as Knuckles, is also a fountain that can send the player flying forwards, like a Spring.

When playing as Sonic the Hedgehog, the goal is to blast through this Action Stage and release the Animals trapped in the capsule.

Knuckles the Echidna begins the level searching for the three pieces of the Master Emerald in the lower area of the city, which is the daytime area of Sonic's version of the stage. There are many hazards in this Action Stage, such as Cop Speeders.

In the console/PC version of Sonic Generations, Speed Highway appears as the fourth Stage, as well as the first Stage in the Dreamcast era. In this game, Speed Highway features refreshed graphics and two Acts: one for Classic Sonic and one for Modern Sonic. Upon clearing it, the player will save Cream and Cheese from the Time Eater's petrification.

In Mario & Sonic at the Sochi 2014 Olympic Winter Games, a snow-capped version of Speed Highway appears as a route for the Roller Coaster Bobsleigh event. In this game, Speed Highway borrows many elements from its incarnation in Sonic Generations. Sometimes, there are obstacles in the form of speeding cars or Cop Speeders . The playable characters also sometimes slide down cranes or unfinished sections of the road. At the end of the course, the competitors also ride a helicopter, and will even slide down a building wall, much like Sonic does in Sonic Adventure. 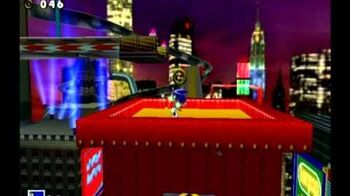 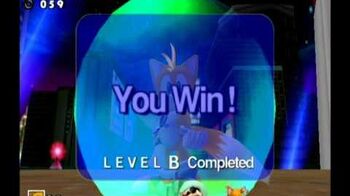 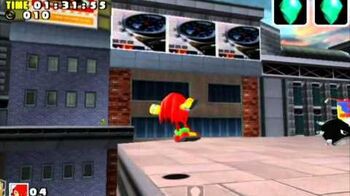