For the Sonic Underground DVD with the same name, see Sonic to the Rescue (DVD).

"Sonic to the Rescue"

"Sonic to the Rescue" is the second episode of the anime series, Sonic X. It first aired in Japan and the United States on 13 April 2003 and 13 September 2003 respectively.

The episode starts out the morning following the events from the night before. Sonic and Chris are at their mansion's balcony with Chris on the phone with his mom and Sonic looking rather bored. When Chris admits that he dove into the adult swimming pool, his mom becomes shocked, only to be relieved that he rescued a "cat", much to Sonic's disgrace claiming that he is a hedgehog. Chris responds that his mom would not believe her son from rescuing a blue talking hedgehog and asks Sonic when and how did he learn to talk, to which Sonic does not remember. Chris then talks with his dad on the phone, who had be notified of the situation by his wife. In the end, Sonic shakes his head in dismay while Chris tries to feed his new and unusual guest with cat food since he checked on the internet that most hedgehogs love cat food, but Sonic does not favor cat food. Chris suggests crickets, but that resulted in the hedgehog jumping away and going for a run.

After some time, Sonic returned to the mansion and watched the incident of what happened in the first episode on the news with Chris. The citizens being interviewed mainly claimed that Sonic was no regular animal but Sonic does not seem to care much about what the humans think of him. At that time, Chris' grandfather Chuck walks in and informs his grandson about the incident yesterday only to see Sonic sitting there on the couch next to him. Sonic and Chuck stare at each other eye to eye before Chris covers Sonic with a pillow suffocating him until Sonic knocks the pillow away. After Chuck realizes he is indeed the blue hedgehog spoken of in the news, he grabs a screwdriver in attempt to tinker with him as if he were a machine until Chris convinces Chuck that Sonic was not a machine but in fact a real talking blue hedgehog. At that moment, the T.V. presented them with video footage of Cream the Rabbit and her Chao friend Cheese being trapped and wanted to be left alone from the firemen attempting to rescue them. Sonic is relieved to see that he was not the only one that got sent to Earth, and races off to find them only to come back seconds later under the realization that he has no idea where to look.

Gathering at the mansion's garage, Chuck contacts the government and finds out that his friends were captured by the authorities and located them on a top secret military base located in the middle of a desert named Area 99. Sonic notes that the military base shares some similarities with a typical base of Eggman. The government apparently hypothesizes that these strange creatures may be a new danger or mysterious threat sent to spy upon and destroy the world and Chuck wonders if they are right. Sonic, feeling insulted, decides to leave to rescue his friends himself, but Chuck does not allow it unless Sonic agrees for their assistance. Chris questions Chuck whether he is being serious about this mission and Chuck responded that he's being serious and reminds Chris that he would not want to have a boring life like his father's, giving him the opportunity for some excitement so Chris agreed.

The three of them drive off into the desert towards Area 99's location. Sonic complains about the speed they are moving at while Chris gives Sonic a small Infrared Scope with a communicator. Chuck explains that Area 99 is full of security lasers and with the Infrared Scope, Sonic can detect and avoid them. He then takes off through the road at high speed. After witnessing Sonic's speed, Chuck gets excited and hits the accelerator pedal hard to keep up with him. Meanwhile, in the research lab of Area 99, Cream and Cheese are being examined, much to their fear. Back on the road to Area 99, Chris tells Sonic to infiltrate Area 99 via entering an air vent and Chuck advises Sonic to think and act quickly when he is inside the facility. Sonic jumps over the gate which alerts the facility that there is an intruder on the loose in the military base.

Once successfully inside the base, Sonic runs through corridors unnoticed by the surveillance cameras and eventually comes toward the base of operations where Cream and Cheese are being held and experimented on. At first, he was not able to do much due to the tight security around the area until mysterious tiny paper airplanes destroyed some of the wiring of Area 99's electrical system and therefore shutting down the facility's power. Sonic was able to break Cream and Cheese free from their confinement, but much to Cream and Cheese's disruption, they are noticed by the researchers. As Sonic, Cream and Cheese run to escape, Cream comments on how Sonic was able to shut down the power, but Sonic responds that it was not his cause. Cream believes it probably must be the cause of luck, but their luck ran out as the power eventually came back on with the security surveillance cameras looking at them.

The cameras open up their tops to reveal laser beam guns and all of them are shooting at the heroes throughout the corridor. Sonic dispatches the cameras but then had to help Cream and Cheese as the facility began to activate their lockdown procedures by sealing the corridors with doors. As they had to deal with more of the laser security cameras, another fleet of tiny mechanical paper airplanes flew by again and destroyed the cameras, giving Sonic, Cream and Cheese the opportunity to proceed on. As the facility was still in its lockdown procedures, the power dies down once again, but their laser cameras are now out of control as they are firing at random directions. While Sonic, Cream and Cheese run up the stairs, a laser blast from the camera destroys a part of the staircase where Cream and Cheese are standing, only to fall off and desperately holding onto Sonic's hand.

Using all of his might, Sonic carries Cream as they jump from broken staircases to climb up high into a safe area. Cream thanks Sonic for saving them while Sonic places his ear towards the wall, being able to hear the sounds of a plane droning. Sonic concludes that the plane must be the Tornado 2, meaning that Tails is on Earth too. He smashes through the roof of Area 99 with Cream and Cheese and escape on to the Tornado. It is then revealed that Tails was the one who had sent all of those ingenious paper airplane devices in to help them. Seeing the plane with Sonic and his friends on it, Chris and Chuck return home. As Sonic's friends introduce themselves, Chuck takes interest to the tiny airplane devices and how Sonic and his friends ended up in the humans' world while Chris asks Sonic to be more careful. Then everyone ponders about who else might have shown up with them. At the end, they realize that Dr. Eggman must be within their midst and as proof, the doctor is shown on an unnamed island inside his fortress, plotting to take over this new world and build his Eggman Empire on it. 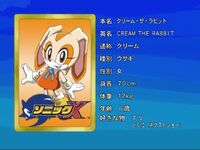 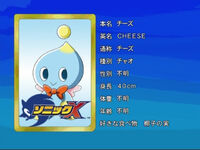 Cheese
Add a photo to this gallery