watch 02:45
The Loop (Games)
Do you like this video?
Play Sound
Main page Beta elementsGallery

This article pertains to the beta elements of Sonic the Hedgehog Triple Trouble.

Some magazine screenshots from an early version of the game show Sonic the Hedgehog and the newly introduced Nack the Weasel in Great Turquoise Zone. Generally speaking, Nack does not usually appear outside the Special Stages. 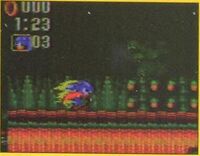 Sonic dashing in Meta Junglira Zone with a flaming Strike Dash. In the final game, the Strike Dash only makes sparkles.
Add a photo to this gallery

A 3D Special Stage with a completely different setting not seen in the final game. Instead of flying the Tornado, Sonic seems to fall forward.
Add a photo to this gallery

Knuckles's gliding animation has unused sprites, supposedly to depict him getting tired in the game's opening.

An alternative idle sprites for Nack the Weasel not found in the final game.

Nack was supposed to appear on Bonus Panel at the end of each Act. The reward granted by this post plate is unknown.

An unused Badnik enemy that was supposed to appear in Atomic Destroyer Zone.

Though this sprite was used the Japanese release, it goes unused in the American release.