Feel the need for speed!!! Sonic is back at his best for the NEOGEO POCKET COLOR!

Sonic the Hedgehog Pocket Adventure (ソニック・ザ・ヘッジホッグポケットアドベンチャー, Sonikku za Hejjihoggu Poketto Adobencha?), also known as Sonic Pocket Adventure, is a platforming game in the Sonic the Hedgehog series and the only Sonic game to be made for the Neo Geo Pocket Color handheld console. Released on 4 December 1999 in United States, the game was made by SNK Product Development Dept. Division 1 and is the second Sonic game to be released on a non-Sega system (the first being Sonic Jam for the Game.com).

Sonic the Hedgehog Pocket Adventure is a side-scrolling platforming game with graphics and gameplay heavily similar to Sonic the Hedgehog and Sonic the Hedgehog 2 for the Sega Mega Drive. The game's objective is to reach the end of each Act of a zone (a level in the game) in ten minutes. The main feature is the single player mode, where the player takes control of Sonic the Hedgehog in gameplay much like he had in Sonic the Hedgehog 3 & Knuckles. His moveset includes classic techniques like the Spin Jump, Spin Attack (called "Sonic spin" here), and Spin Dash. Momentum physics in the game are nearly the same as in earlier games, except that Sonic is slightly heavier.

The game borrows several gimmicks and items from both Sonic the Hedgehog and Sonic the Hedgehog 2. Like in earlier games, Rings can be found everywhere in the Acts and will protect the player from taking damage, though they cannot protect from drowning, falling in bottomless pits, or getting Time Overs. Collecting them adds points to the end-of-Act score tally, and collecting a hundred grants the player an extra life. When taking damage Sonic loses all his Rings, and getting hit without any Rings costs the player a life, along with making them restart from either the beginning of the Act or the last passed Start Post.

The game also features item boxes containing the basic power-ups, such as the Super Rings (grants ten extra Rings), Shield (protects against one hit of damage), 1UP (grants an extra life), Power-Sneaker (briefly increases speed), and Invincible Protect (grants brief invulnerability). Each Act also has several Start Posts, which save the player's progress when passed. Additionally, there are 96 hidden photo pieces throughout the game, which can be collected to assemble puzzles in the Puzzle Room.

When at the end of a zone's first Act, the player must run past a goal plate to finish. To complete the second Act of a zone, a capsule must be opened after beating the boss. The player can collect six of the the chaos emeralds by completing the Special Stages and the final one by clearing the penultimate zone. Collecting all seven Emeralds will unlock the game's good cinematic ending.

Sonic the Hedgehog Pocket Adventure consists of nine zones. Most are made up of two Acts, while others only have one. The majority of these zones involve standard platforming, and at the end of each the player has to fight a boss that is either Dr. Robotnik in one of his machines or an entirely different opponent.

All zones in the game are directly inspired by those in Sonic the Hedgehog 2, with graphics of the first zone being duplicated from the original Sonic the Hedgehog. While most zones are unlocked as the player clears them, the player has to gather all seven chaos emeralds to unlock the final one. All the zones in order are:

By holding onto fifty Rings at the end of each zone's first Act (including Sky Chase Zone) and leaping into the large ring that appears behind the goal plate, the player can enter one of six Special Stages. In these stages, the player can collect six of the seven chaos emeralds. The seventh emerald is kept by Dr. Robotnik, and is obtained from the Last Utopia Zone boss.

Special Stages in Sonic the Hedgehog Pocket Adventure heavily resembles the ones in Sonic the Hedgehog 2. Here, Sonic runs through a 3D half-pipe littered with rings and Bombs. The player must collect the requisite amount of rings to cross each checkpoint and obtain a chaos emerald: fail to amass the quota and the player will fail the Special Stage. There are three checkpoints per round and ring requirements become increasingly stringent as the game progresses. There are also sparkling flower objects exclusive to this game, which reward the player with continues.

Aside from single player mode, Sonic the Hedgehog Pocket Adventure features multiple other playable modes, referred to as "Rooms", which can be accessed by selecting the "Go To Room" option on the title screen. The zones available in the rooms depend on how far the player has gotten in single player mode.

The Trial Room is a time attack feature which allows players to replay previously cleared Acts with the aim of beating their record. After inputting a name upon the player's first entry on the menu, the best times are recorded on a score screen with the overall performance being graded with the following medals: Bronze, Silver, Gold, or Platinum. Two modes are available:

A rankings option is available to view the best time records for both Time Trial and Advanced.[5] A Top 5 Update feature is available to connect with other players and exchange or combine each other's rankings by using a link cable for the Neo Geo Pocket Color.[5] There is an option to switch between personal best and all time best, from the personal records section a reply of the Act is able to be played. The Data Initialize function clears all records.[6]

The Duel Room serve as the multiplayer component of Sonic the Hedgehog Pocket Adventure, which allows gaming for two players over link cable between two Neo Geo Pocket Colors with two copies of the game. In both two player versus modes, player 1 controls Sonic and player 2 controls Tails. The two characters share the same move set, making the gameplay identical for both players. The Duel Room features two modes:

The Puzzle Room is where the photo pieces found in the single player mode are gathered and placed into six character images, each containing sixteen photo pieces. This room features three modes:

Completing three puzzles unlocks the game's Sound Test, and by assembling all six, a "Special Stage" mode is unlocked where the player can play through the game's six Special Stages in succession.

Game Option is the settings menu for Sonic the Hedgehog Pocket Adventure. Here, the player can change the game's difficulty between "Easy" or "Normal" mode (Easy mode removes several obstacles in the zones), toggle the ability to Time Out, start the game with one, three, or five lives, or toggle the auto power off function where the system will shut off after a certain amount of time.[7]

SNK Product Development Dept. Division 1 developed Sonic the Hedgehog Pocket Adventure, though Yuji Naka from Sonic Team are credited as a supervisor and producer. The game was originally announced in February 1999, when SNK revealed that Sonic was to be among the upcoming titles for their new handheld system, the Neo Geo Pocket Color.[8] The game was unveiled in early August of the same year, revealing plenty of the game's first level as well as some of the various gameplay modes. More and more of the game was revealed up until it was fully released on 4 December 1999 in North America,[2] 25 May 2000 in Japan,[1] and 25 February 2000 in Europe.[3]

All music tracks are 8-bit arrangements of pieces from the original soundtracks from Sonic the Hedgehog 3, Sonic & Knuckles, and Sonic Jam.

Sonic the Hedgehog Pocket Adventure received high positive reviews during its release. IGN acclaimed it with a 10 out of 10 score, praising the game's high capabilities on the handheld, multiplayer modes, and replay value.[13] Pocket Magazine gave the game 4.67 stars.[14] Dean Scott of Computer and Video Games magazine gave the game 5 stars, praising how the single player mode is familiar to the original three 16-bit games.[10] Christian Huey of AllGame gave the game 4 stars of out of 5, stating that the game is a "dumbed down version" of Sonic the Hedgehog 2 on the Sega Mega Drive.[9]

GameSpot gave the game an 8.3 out of 10, praising the game for its graphics, multiplayer modes, and puzzles, while stating the only criticism being the game's short length.[12] Daily Radar also gave positive reviews, stating that the game is "awfully good. We'd love to say it's the single best reason to buy a Neo Geo Pocket."[18] Chris Murphy of Retro Gamer gave the game 4.67 out of 5, stating the game to be reasonably substantial and concluding the review with: "If you're a Sonic fan, this is definitely high on the roll of honor in his CV, and you owe it to yourself to play it." [15] 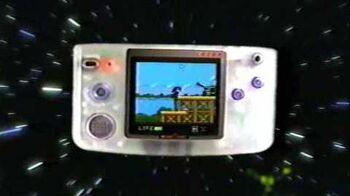