Not to be confused with Sonic: Genesis or the original Sonic the Hedgehog.

Like in the original game, Dr. Ivo Robotnik (AKA Dr. Eggman) has invaded South Island to collect the six Chaos Emeralds and conquer the world with them. He also started kidnapping the local Animals on the island to turn them into evil robots.[1] However, the doctor was stopped by Sonic the Hedgehog, who collected the Chaos Emeralds before he did, saved the Animals, and, eventually, restored peace to South Island.

Like in the original game, Sonic the Hedgehog Genesis is divided into seven Zones, all of which have three Acts each with a battle against Dr. Eggman at the end of the third Act (with the exception of Final Zone, which is a single, short Act).

Sonic the Hedgehog Genesis features four different modes, which can be chosen while on the title screen. These are:

Original Mode[4] is the standard mode of the game, with the same gameplay as that from the original Sonic the Hedgehog.

Anniversary Mode[4] is the same as Original Mode, but with the Spin Dash from Sonic the Hedgehog 2 added.

The Juke Box allows the player to play different soundtracks and sound effects from the game. It is unlocked after completing the game for the first time.

Options[4] is the settings menu for Sonic the Hedgehog Genesis, which features the following settings:

Sonic the Hedgehog Genesis received mixed-to-negative reviews, holding an user score of 2.4 in Metacritic based on ninety three reviews, indicating "generally unfavorable reviews".[5] Its poor frame rate and bad emulation were the main points of criticism.

Nintendo Power was more positive of the game, giving it a rating of 60 out of 100. It wrote that "considering that "Sonic Mega Collection" for GCN already boasts a perfect version of the original Sonic, this game is a bit of a tough sell, but at least the inclusion of the 'hogs trademark Spin Dash adds some appeal".[5] Play Magazine was a little more negative, rating the game 40 out of 100. It wrote that the "few minor twists featured in Anniversary Mode did not matter when the fundamentals are so thoroughly screwed".[5]

GameSpy was more critical of the game. Though it cited that the graphics looked passable and the levels were short, it panned the chuggy frame rate, the lack of speed, and the sudden "pop-ins" the game had. It also wrote that the game "more closely resembles an adaptation of the Game Gear version of Sonic the Hedgehog rather than the Genesis version". It ultimately concluded that "this doddering version of Sonic the Hedgehog has an appointment with the glue factory for sure".[7] GameSpot gave it a score of 2.5 out of 10, meaning "terrible game", writing that "the jumpy graphics transform this classic side-scroller into a crushing disappointment".[6] Modojo called it "an insult to the Sonic legacy and the fans alike" and "a piece of garbage port of a fifteen-year old Sega Genesis game with only a battery save and a new spin dash move to spruce it up".[8] 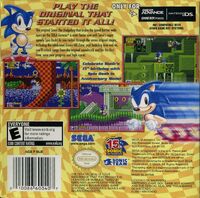 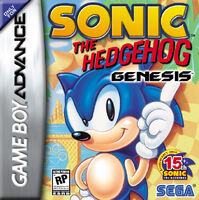