You may also be looking for Chaos Crush.

The main menu of Sonic the Hedgehog CHAOS CRUSH!.

The gameplay is similar to that of classic arcade games such as Arkanoid or Breakout. The player uses the arrow keys to move the pad across the screen, and with it the player hits the ball to break the colored blocks above. If the ball is about to miss the pad, the pad can slightly hit the ball by hitting it by its very side. The blocks change colors corresponding to how many hits they have left. Power-Up Gems that grant the ball special abilities also appear, based on the characters of Sonic the Hedgehog, Silver the Hedgehog and Shadow the Hedgehog. When activated, the player can press the spacebar to fire the ball as a powered shot with the corresponding character's ability. 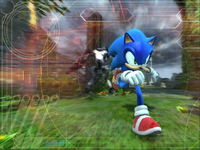