It’s time to usher the past into the future in this enhanced recreation of Sonic CD!

Sonic the Hedgehog CD, also known as Sonic CD Classic, is an enhanced remaster of the original Sonic the Hedgehog CD released for the Sega CD. The game was developed by Christian Whitehead and published by Sega in December 2011. It was released digitally on multiple platforms, including the PlayStation 3 through PlayStation Network, the Xbox 360 through the Xbox Live Arcade, and iOS and Android mobile phones, along with being available on PC through Steam in January of the following year.

The port was later added to the Sega Forever service on 1 February 2018 for mobile platforms. Following the announcement of the Sonic Origins compilation, Sonic the Hedgehog CD was delisted as a standalone title on 20 May 2022,[14] except on mobile devices.[15]

Little Planet is a tiny planet filled with beauty and mystery. Appearing over Never Lake for one month per year, it is a place where the past, present and future collide, thanks to the Time Stones that lie within the planet.[16]

Not too long after Little Planet makes its annual appearance over Never Lake, Sonic travels to Never Lake, hoping to see this cosmic event. Along the way, he is followed by Amy Rose. However, upon arriving in Never Lake, he finds Little Planet chained to a mountain and covered in a mechanic shell. As it turns out, Dr. Eggman has captured the planet to find the Time Stones, with which he will be able to conquer the world.[16]

Wasting no time, Sonic runs across the chain that keeps Little Planet tied to his world, and lands in Palmtree Panic, where he learns that he must use Time Warp signs to travel to the past, where he will be able to destroy robot teleporters and secure a bright future for Little Planet's different regions. Eventually though, he meets Amy Rose, who falls in love with him and tries to hug him. Ignoring her, Sonic continues his adventure.

After encountering and defeating Eggman in Palmtree Panic, Sonic continues onward to Collision Chaos, with Amy following him. Suddenly however, Metal Sonic, a robot built by Eggman to replicate Sonic's abilities, appears out of nowhere, grabs Amy, and escapes with her. Now having to save Little Planet and Amy at the same time, Sonic continues across Little Planet, destroying Eggman's various contraptions and defeating Eggman repeatedly along the way.

Eventually, Sonic ends up in Stardust Speedway. There, he meets Eggman and Metal Sonic, the latter of whom challenges him to a deadly race, with Amy being tied up at the finish line. After Sonic wins, Metal Sonic is destroyed and Eggman is forced to retreat while Sonic frees Amy. Afterwards, Sonic goes to Metallic Madness, where he finds Eggman in the Egg Spinner. After the doctor is defeated, a chain reaction is triggered, causing the shell that covers Little Planet to break apart and prompting Sonic to leave Little Planet with Amy. After he leaves Amy in a safe place, Sonic runs away and sees Little Planet get freed. After that, the game's ending will depend on the player's progress:

Sonic the Hedgehog CD is a 2D side-scroller video game with the same gameplay as the original game. Here, the player takes control of either Sonic or Tails. While their core movements, which are running and jumping, are the same, Sonic can perform a Super Peel Out to gain speed in an instant, while Tails is capable of flight and swimming underwater. To move their playable character in the mobile versions, the player is provided with a virtual

on the left and a jump button on the right.

As with the original game, Sonic the Hedgehog CD is divided into seven Rounds, each split into three Zones, the third of which features a boss fight. The player has to beat these Zones in less than ten minutes to progress in the game.

Intro Movie plays the intro cutscene of the game.

Soundtrack allows the player to switch between the Japanese (JP) and American (US) soundtracks of the game.

Exit Game allows the player to leave the game.

These are the achievements and trophies for the Xbox 360, PlayStation 3, Steam, Android and iOS versions of Sonic the Hedgehog CD.

When Sega announced which of their games they would like to release in the iOS App Store, Christian Whitehead showcased a concept demo of the game being played on his iPod touch in 2009.[19] The port is not a direct emulation of the original Sega CD version, but rather it was developed from scratch using Whitehead's Retro Engine. He then contacted Sega to tell them about his release plans.

The 2011 re-release of Sonic the Hedgehog CD received positive reviews with Metacritic assigning the PlayStation Network version an 80% (based on 12 reviews),[22] the Xbox Live Arcade version an 82% (based on 20 reviews)[21] and the iOS version of the game a 93%.[23] The iOS version became the highest rated Sonic game on the website as well, along with being the website's second-highest rated iOS game of 2011 (losing only to World of Goo);[31] 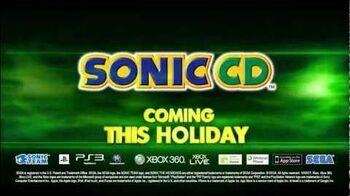 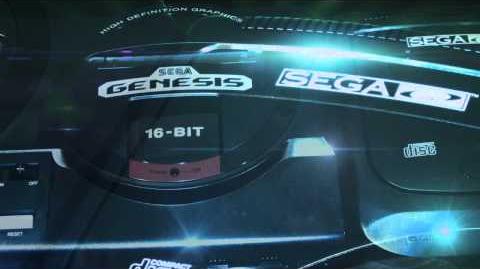 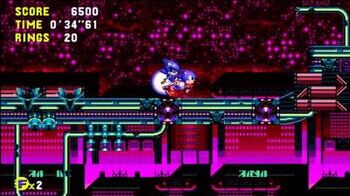 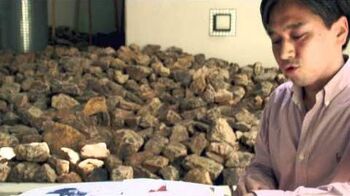