watch 02:39
The Loop (Games)
Do you like this video?
Main page CreditsGallery

For other uses, see Sonic the Hedgehog 4 (disambiguation).

Sonic the Hedgehog 4: Episode I (ソニック・ザ・ヘッジホッグ4 エピソードI, Sonikku za Hejjihoggu Fō: Episōdo Wan?), originally codenamed Project Needlemouse, is the first part of an episodic video game in development as part of the Sonic the Hedgehog series. This episode was released in October 2010; it was originally to be released in the summer of 2010 but was pushed back for further development. The game was first announced on 8 September 2009,[2] and its real name was revealed on 4 February 2010.[3]

The game was developed by Sonic Team as well as members of Dimps. The game was released as a digital download for WiiWare, PlayStation Store, Xbox Live Arcade and iPod app store services.[5] Jun Senoue helped to compose the music of the game.

An interview with Takashi Izuka stated that "Fans will be very pleased with the cast in Episode 2", implying that Sonic would not be the only playable character in future episodes. He also announced an as-yet unknown new move for Sonic, as well as that the Homing Attack would appear in the game, saying: "I wanted the user to enjoy an easy-to-play feeling by the attack sequence that this [Homing Attack] allows, and find the fun routes in the air."

On February 8, Sonic 4 brand manager Ken Balough went on record to confirm that work on the next installment was underway. Sega of America and Europe also provided feedback and input on the subject matter. Episode 2 was revealed to have its own original Zones as Episode 1 was a throwback to Sonic the Hedgehog (1991) and Sonic the Hedgehog 2.

Sometime after Sonic the Hedgehog 3 & Knuckles, with the Death Egg finally destroyed and the Master Emerald safe, Sonic parts with Tails to explore new territories on his own. Meanwhile, a vengeful Dr. Eggman has taken measures to defeat his arch-nemesis by enhancing his past creations and mechs.[6]

Despite Dr. Eggman's best efforts, Sonic destroys each of his refined creations and chases the madman to his newest lair, the E.G.G. Station Zone. There, Sonic defeats each of his creations once again, including the powered-up Death Egg Robot, which destroys the station. Safely back on his planet, Sonic celebrates his victory in Splash Hill with his animal friends.

A post-credits scene, obtained by collecting all the Chaos Emeralds, shows Dr. Eggman laughing, along with the silhouette of Metal Sonic, leaving a cliffhanger for the next episode.

Special Stages in the gameplay akin to ones in the first game, where Sonic must navigate a maze to reach the Chaos Emerald, collecting Rings and avoiding the exit blocks. This time, the rotation is controlled by the player instead of automatically. Controllers with motion control support can use either a traditional control method or by tilting the controller to control the rotation.

Two significant differences between these stages and the original ones are the inclusion of ring gates and a time limit. Ring gates are barriers that prevent the player from crossing into the next area of the stage, but can be passed once the appropriate number of Rings, shown on the gate, have been collected. A time limit also kicks in at the start of each stage and boots the player out if they haven't collected the Emerald in the time frame. The starting amount varies by level (30 seconds for Stages 3 & 5 and 90 seconds for the others), but can be extended in five, ten or fifteen second increments by collecting orbs around the stage.

Once a Special Stage has been completed, it can be replayed on the level select stage in either Score or Time Attack modes, with a 1-Up replacing the Emerald. Once the player obtains all seven Chaos Emeralds, Sonic can transform into Super Sonic during a regular level except for boss fights.

The game was playable by the visitors of the Electronic Entertainment Expo 2010. Players were only able to do the whole level of Splash Hill Zone. The Special Stages of the game were not shown. The game was highly praised at the E3 and there was a lot of audience at show of Sonic 4.

In February, a build of Episode 1 was submitted to Xbox Live Arcade's PartnerNET service, where developers were given access to upcoming downloadable titles for testing purposes. Soon after, screenshots, music and progressively more gameplay footage were leaked onto the Internet. Eventually, a playthrough of the entire game was leaked and Sonic Retro, which had already banned leaked material when more than they approved of had been released, responded by banning Sonic 4 discussion for several days. As well as this, PartnerNET shut down for a night. Other websites also made efforts to crack down on leaks, such as banning posting of leaked content. The build was controversial, due to it containing "floaty" physics speculated to be due to its using the Sonic Rush engine, poor animations and criticized the level design features such as gimmick-based acts that were disliked by most fans.

On 20 May 2010, SEGA announced that due to fan input, the game would be delayed until later in 2010, in order to extend the development of the game. They stated in game magazines and on GameSpot's On The Spot that this was specifically done to allow various fan requests (since the game was leaked) to be implemented, including more momentum-based level designs and improved physics closer to that of the Mega Drive titles.

Releases for the iPhone and iPod Touch were also announced, finally ending speculation of the fourth unknown platform, although it was leaked months before when images were found in the website's source code. It was also revealed that the iPhone version would receive two extra levels, which turned out to be the Mine Cart and Pinball gimmicks stages in Lost Labyrinth Zone Act 2 and Casino Street Zone Act 2, which were heavily criticized in the leaked gameplay footage. Sega said this was done because the levels fit the iPhone controls more. Fans speculated that the console versions would receive new, non-gimmick levels to replace them. Sega confirmed this with pictures several weeks before the final release. The new, console-specific levels were much closer in design to the other levels and featured new gimmicks which require platforming.

Sonic the Hedgehog 4 has been criticized due to the design and content of the game. Some people believe that it is not a true sequel to the classic games, due to Episode I's content being largely based on that of previous games with minor changes, and level design that features speed boosters in every level (a staple of Dimps' level design with their previous Sonic games) and object placement that forces the use of the Homing Attack. The latter is a move that some fans do not feel belongs in a 2D game, particularly not one based on the classics and set before its debut in Sonic Adventure. The music has also been criticized, due to it featuring low-quality synths and drum samples (the latter from Sonic the Hedgehog 2, not the more advanced ones from Sonic the Hedgehog 3) that vary little between songs.

A highly controversial item is Sonic's design, which is the modern style model that debuted in Sonic Adventure and has since received refinements until its most recent state in Sonic Unleashed. Many fans believe that the classic Sonic design should have been used and a petition was set up for SEGA to include the different version. However, in a magazine, Takashi Iizuka said that the classic style wasn't returning, as all games since Sonic Adventure have featured Sonic in his modern design (excluding Sonic Generations for having both Sonics in the game).

Sonic the Hedgehog 4: Episode I received generally positive reviews, with crticism focusing on poor physics and lack of momentum compared to the Genesis 16-bit games.

These are the achievements and trophies for the Xbox 360, PlayStation 3, Steam and iOS versions of Sonic the Hedgehog 4: Episode I.

The game was first announced through GameSpot by Sega of America on 8 September 2009, the eve of the 10 anniversary of the launch of Sega's Dreamcast video game console and the release of its launch game, Sonic Adventure in North America. At the time, it was referred to as "Project Needlemouse",[2] in reference to the name "Mr. Needlemouse", which was the mistranslated prototype code name of Sonic the Hedgehog when he was being pitched as a new mascot for Sega.[30]

The initial announcement was accompanied by a brief teaser trailer, which included sound effects from Sega Mega Drive-era Sonic games,[2] as well as an interview with Sega's associate brand manager, Ken Balough, who acknowledged that "old-school Sonic fans have long asked to see Sonic return to a more 2D style of gameplay", and that "Needlemouse is that critical first step that brings Sonic back to his 2D roots".[4]

1: The Details: Each name on the picture above is a potential playable character in Project Needlemouse. However, not all of them are going to make the cut – and each day this week until Friday, we’re going to update this picture with a rejected stamp over those who will not actually be showing up!

2: The Challenge: Answer our trivia questions about old school Sonic games! (Genesis era) We’ll post trivia questions each day on a specific part of our SEGA/Sonic sites, and you all have to work together to figure out the right answers and post them there! Each day we’ll challenge you guys to get a certain number of people to post the correct answers – and if you meet that challenge, we’ll remove more names from the picture in a new blog the following day![31]

1: In Sonic 1, how many rings were needed at the end of an act to enter a Special Stage?

2: How many emeralds were in the original Sonic 1 for Genesis/Mega Drive?

3: What colors were these Emeralds?

1: What was the general name for the robot enemies in the early Sonic games?

3: In Sonic 2 for the Genesis/Mega Drive, how many lives was a ‘continue’ worth?

2: What was the first game to feature Super Sonic?

3: The original Sonic the Hedgehog featured Special Stages with morphing backgrounds – can you name two of the animals seen in that background?

Answer: Birds and Fishes (There were no more animals)

1: If you lock Sonic 3 onto Sonic & Knuckles, what was the largest amount of Emeralds you could collect from the Special Stage?

2: Yuji Naka is credited for much of Sonic's history, but who is the man that actually designed Sonic?

3: During his creation, what was the Japanese name originally given to Sonic?

The fans "won" the bonus points contest and was awarded not only on 2 extra characters struck off the list, but a piece of concept art developed for the game (which is very similar to the same badnik in Sonic the Hedgehog 2). A local fan of the Sonic fan community also went through the raw data of the file and discovered that it was scanned to the computer late last spring.[34] The conclusion of the contest indicated that Sonic is the only playable character in this game. However, a recent issue of Gameinformer has revealed that there will be more playable characters returning for the second episode of the game.

In June, Sega announced a contest to celebrate Sonic's 19th anniversary where people would create videos with the winner going to Tokyo to see the finished version of Episode 1. The voting system was intended to allow one vote per day, however, people found workarounds to allow multiple voting by clearing their browser's cookies and cache due to poor site coding. On 16 July, Sega suspended the voting. On 2 August, the winners were chosen by input of Sega staff and Sonic Team. 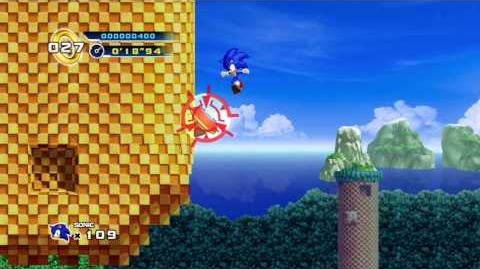 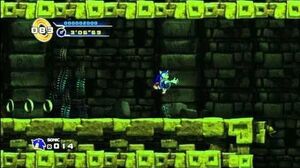 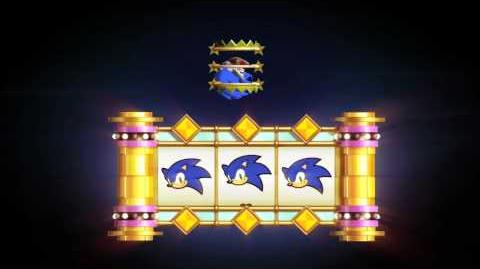 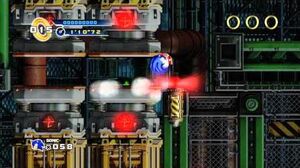 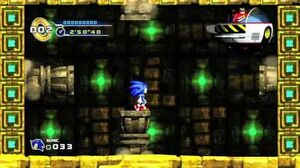 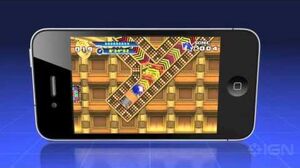