View source
watch 02:40
World of Warcraft: Dragonflight - The Loop
Do you like this video?
Play Sound
Main page GlitchesBeta elements

The title screen of Sonic the Hedgehog 3 & Knuckles.

(See "Release dates" in Sonic & Knuckles for more information about other platforms.)

Following the West Side Island incident, Dr. Robotnik's Death Egg falls from orbit and impacts the Floating Island along the way, thus pushing the island into the ocean and creating a giant tsunami. Fortunately, the island does not sink into the sea; instead, it stays slightly above the sea as if nothing has happened. Having survived the crash, Dr. Robotnik is aware that the Chaos Emeralds are somewhere on the Floating Island. He also detects the energy of a giant Chaos Emerald on the island, which he can use to re-launch the Death Egg. With this new plan in mind, the doctor starts to build a base on the Floating Island while catching the local Animals to turn them into Badniks.[8]

Days later, Dr. Robotnik meets Knuckles the Echidna, the guardian of the Floating Island. Learning of Knuckles' position and duty, the doctor tells him that he is a scientist who has come to "investigate" the Death Egg. He also "warns" Knuckles about Sonic, who is an evil hedgehog that plans to steal the island's Master Emerald. Believing Robotnik, Knuckles teams up with him to stop Sonic. Meanwhile, Sonic is relaxing somewhere away from the Floating Island until his friend, Tails, detects a Chaos Emerald energy reaction out at sea with his Jewel Radar. As Tails ponders if this reaction has something to do with the tsunami that appeared days ago, Sonic finds a ring with ancient inscriptions on it that gives him a strong sense of nostalgia and prompts him to set out on another adventure. Eventually, Sonic and Tails head out to investigate the incident out at sea.[8]

Arriving with Tails at the Floating Island in the Tornado, Sonic uses the seven Chaos Emeralds he had acquired prior to turn into Super Sonic and begins exploring the island while Tails tries to follow. Shortly after arriving on the island however, Knuckles pulls off a cheap shot on Sonic from below, causing him to lose his Super State and drop the Chaos Emeralds. Knuckles proceeds to take the Chaos Emeralds before running off.[9] Now having to retrieve the Emeralds again and stop Dr. Robotnik, Sonic and Tails make their way across the island, dealing with Robotnik and Knuckles' attacks along the way. Eventually, they arrive at Launch Base Zone, Dr. Robotnik's base where he has almost finished re-building the Death Egg. At the end of this Zone, the Death Egg is ready to take off. To reach the Death Egg, Sonic and Tails hitch a ride on a nearby Egg Mobile, though Knuckles keeps them from proceeding with it. Fortunately, local tremors causes him to lose his balance and fall down from the pillar he is on, allowing Sonic and Tails free passage. In the end, the duo manages to jump onto a platform on the Death Egg just as it starts to take off. There, Robotnik returns to defeat Sonic through excessive force with the Egg Rocket. As Sonic and Tails defeat Robotnik once more, the battle has already taken its toll on the Death Egg during a critical point of its launch, and the space fortress plummets back to the Floating Island while Sonic and Tails watch from afar.[9]

Immediately after, Sonic and Tails fall to Mushroom Hill Zone. Meanwhile, the Death Egg lands in the Floating Island's volcano, still intact enough for Dr. Robotnik to salvage it and re-launch it. Aware of this, Sonic and Tails continue their mission to destroy the Death Egg. However, their quest is suddenly interrupted when they spot Knuckles appearing from a hidden door in the thicket. After carefully examining the vicinity, Knuckles disappears into the forest. Once sure that Knuckles is gone, Sonic and Tails emerge from their hiding place and open the door from where Knuckles came out of with a nearby Switch. Inside the hidden room, they are caught in an overflowing, dazzling light. Taking a closer look inside the light, they see a Super Ring. Unable to quell their curiosity about what this ring could be, they touch it, causing them to be taken to Hidden Palace Zone, a giant solemn hall with a pristine altar. There, they see some pillars with the Master Emerald and some other stones, which use the power of their Chaos Emeralds to become inert Super Emeralds. Filled with questions, Sonic and Tails decide to set off to power the Super Emeralds, stop Dr. Robotnik from re-launching the Death Egg again, and discover the mystery of Hidden Palace Zone.[10]

Making their way though the Floating Island, Sonic and Tails arrive in Lava Reef Zone, the location of the Death Egg. In an attempt to stop the heroes, the space fortress uses its laser eyes to reactivate the volcano. Surviving this attack, the duo arrives in Hidden Palace Zone again, where they have a battle against Knuckles. After Knuckles is defeated though, he, Sonic and Tails witness Robotnik stealing the Master Emerald with the Egg Mobile. Enraged, Knuckles tries to stop the doctor, only for the latter to electrocute him and escape. Realizing that Robotnik has lied to him and that Sonic and Tails are actually trying to save the Floating Island, Knuckles takes the heroes to Sky Sanctuary Zone, where Sonic and Tails continue onward, dealing with Mecha Sonic along the way, before managing to get onboard the Death Egg.

With the Death Egg having made it into space, Sonic and Tails pass though Dr. Robotnik's many contraptions, before fighting Robotnik and his Giant Eggman Robo, a mech powered by the Master Emerald. After losing the battle, Robotnik tries to escape in his Egg Mobile with the Master Emerald, only to be stopped, triggering a chain reaction that causes the Death Egg to crumble and explode. From here, the ending of the game will depend on the player's progress:

While Knuckles is relaxing in Angel Island Zone with some Animals, they are attacked when a bomb thrown by an Eggrobo hits them. However, either by toughness or luck,[9] Knuckles survives the bomb attack and takes off after the EggRobo.

Making his way across the Floating Island, Knuckles has many battles against the EggRobo. Eventually arriving in Sky Sanctuary Zone, where the Floating island is shown falling slowly from the sky, Knuckles is caught by the EggRobo using its Egg Mobile's hook, and is brought to a reactivated Mecha Sonic. As Mecha Sonic is about to attack Knuckles however, he frees himself in the last moment, making Mecha Sonic accidentally destroy the EggRobo. Immediately after, a battle between Knuckles and Mecha Sonic starts, with the former emerging victorious. However, Mecha Sonic uses the stolen Master Emerald and its power to gain an advantage with a Super State. Despite this, Knuckles still wins the fight. Immediately afterward, Sky Sanctuary Zone starts to crumble. From here, the ending of the game will depend on the player's progress:

Sonic the Hedgehog 3 & Knuckles is a side-scrolling 2D platforming video game, which plays identical to Sonic the Hedgehog 3 and Sonic & Knuckles. Players can control Sonic, Tails and Knuckles, each with their own abilities. They can also play as Sonic while being accompanied by Tails, who is controlled by either a second player or an AI. The most basic actions these characters can perform are running and jumping.

The main goal of Sonic the Hedgehog 3 & Knuckles is to pass a series of Acts in less than ten minutes for each of them. These Acts are designed so that they can branch into numerous pathways and have varied secrets for the player to find. At the end of every Act, a boss is encountered. After the bosses of the first Acts are defeated, a Goal Plate will fall. On the other hand, defeating the bosses of the second Acts will allow the player to open a Capsule. Either way, interacting with both of these gimmicks will automatically end their Act.

During gameplay, the player can find Rings, which basically work as the playable character's health. The number of Rings carried by the player is displayed in the top left corner of the HUD. As with past Sonic games, Rings serve as the playable character's main method of protection from damage; if the playable character takes damage while they carry at least one Ring, they will survive, though they will lose all their Rings. Taking damage while not holding any Rings will cost the player a life. The player will also lose a life if they drown underwater, get crushed, fall into a bottomless pit, or spend ten minutes in the same Act. After losing a life, the playable character will respawn at the latest Star Post they touched, or at the start of a Zone if they have not touched any Star Post. If the player runs out of lives, they will get a Game Over. Extra lives can be obtained by breaking Extra Life Monitors, collecting one-hundred Rings, or earning fifty-thousand points.

As a secondary objective in the game, the player can enter Special Stages through hidden Super Rings to collect the seven Chaos Emeralds. By doing so, they will be able to transform into either Super Sonic or Super Knuckles for Sonic and Knuckles respectively. In addition, they will also be allowed to enter seven additional Special Stages to collect the seven Super Emeralds, with which they will be able to transform into Hyper Sonic, Super Tails, or Hyper Knuckles. Depending on whether or not they have collected both the Chaos and the Super Emeralds will affect the ending of the game. In addition, by collecting a certain number of Rings and touching a Star Post, they will be given the option to enter a Bonus Stage and get Rings and Shields.

By collecting all seven Super Emeralds from the Special Stages, each of the three main playable characters (Sonic, Tails and Knuckles) will have access to more powerful forms upon using the power of the Emeralds. As with super transformations, the player must have collected fifty Rings and then press the jump button during a jump (as long as Sonic is not equipped with an elemental shield) to initiate the transformation. While under the transformation, one Ring is consumed per second and once the player has zero Rings, completes the Act or enters a Bonus Stage at a Star Post, the user will revert back to normal.

On October 18, 2014, Christian Whitehead and Simon Thomley released a concept video showcasing a prototype of a remastered version of Sonic the Hedgehog 3 for smartphone devices they have worked on for a while (see video below). However, circumstances prevented the development from proceeding any further.[11]

As showcased in the video, the following aspects of the game were completed:[11][12] 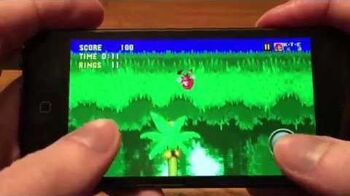 Sonic the Hedgehog 3 & Knuckles received critical acclaim from fans. On Metacritic, the game holds a score of 8.8 based on fifty fan ratings, indicating "generally favorable reviews".[13]