The suggestion for a sequel to Sonic the Hedgehog was first brought up by Jim Carrey when he envisioned a second film entry where he got to reprise his role as Dr. Robotnik.[7] Following the fairly successful release of Sonic the Hedgehog, director Jeff Fowler and several other cast members expressed an interest in developing a sequel that incorporated more elements from the Sonic games, with James Marsden in particular being revealed to have signed up for multiple sequels to the film.[8] Sonic the Hedgehog 2 was later officially confirmed in May 2020, with most of the previous film's cast set to reprise their roles.[1]

The film is scheduled for a release in the United States on 8 April 2022,[5] by Paramount Pictures in association with Sega Sammy Group.[1]

After settling in Green Hills, Sonic is ready for more freedom, and Tom and Maddie agree to leave him home while they go on vacation. But, no sooner are they gone, when Dr. Robotnik returns, this time with a new partner, Knuckles, in search for an emerald that has the power to both build and destroy civilizations. Sonic teams up with his own sidekick, Tails, and together they embark on a journey to find the emerald before it falls into the wrong hands.[9]

Before the announcement of the film, Jim Carrey revealed in a promotional interview for the first film that he could imagine developing the character of Robotnik for a sequel and that the expansion of the character could lead up to that, stating "I wouldn't mind going to do another one because it was so much fun, first of all, and a real challenge to try to convince people that I have a triple-digit IQ... There is so much room, you know, Robotnik has not reached his apotheosis."[7] It was later stated by Sonic the Hedgehog director Jeff Fowler in March 2020 that he had planned a potential sequel for Sonic the Hedgehog to involve more elements from the Sonic the Hedgehog video games.[22] It was also stated by James Marsden in March 2020 that he had signed on for multiple sequels to Sonic the Hedgehog.[8]

On 28 May 2020, the sequel was officially announced to be in development by Paramount Pictures and Sega, with Fowler returning to serve as director, Neal Moritz, Toru Nakahara and Tim Miller serving as producers, and Patrick Casey and Josh Miller, who wrote Sonic the Hedgehog, serving as writers. In addition, Tim Miller, Hajime Satomi, and Haruki Satomi return to serve as executive producers and Neal Mortiz, Toby Ascher, and Toru Nakahara serve as producers, having co-produced the previous film alongside Takeshi Ito.[1] Production was expected to start in March 2021 under the codename "Emerald Hill",[27] a reference to the first Zone in Sonic the Hedgehog 2 Later, on 8 December 2020, Tyson Hesse, an artist who previously contributed to Sonic the Hedgehog, would return to work on the Sonic the Hedgehog sequel. Joining him were also storyboard artist Fill Marc, whose first live-action project would be this film.[28] Marc's exact words were "I wrapped up work on Lower Decks Season 2 last week. Excited 2 announce I’ve been working on the Sonic the Hedgehog 2 Story Team with Jeff Fowler and Tyson Hesse at Blur Studio. My first live action feature coming in 2022".[28]

From the beginning, Sonic the Hedgehog 2 was meant to built upon the foundation established in Sonic the Hedgehog. According to Fowler, the first movie was purposefully designed to be a sparse introduction to Sonic's larger world, with its purpose being to introduce Sonic on his own, establish him as a character, and establish the pre-Eggman version of Dr. Robotnik. With Sonic the Hedgehog 2, the crew was able to open the world of Sonic and tell a much bigger story. Fowler also added that with Knuckles' inclusion in the film, the crew was obligated to make use of the Master Emerald in the story as well, with Fowler describing the two as a "package deal".[29]

In March 2021, it was reported that Moving Picture Company will provide VFX for Sonic the Hedgehog 2.[31] During May 2021, the synopsis for the story of Sonic the Hedgehog 2 was released as Paramount submitted a patent to the U.S. Copyright Office catalog.[9]

As a part of the post-production, the visual effects and animation for the film would be provided by Moving Picture Company, after previously working on Sonic the Hedgehog.[32] Later, on 10 August 2021, it was announced that John Whittington would serve as co-screenwriter.[2]

In January 2021, Tika Sumpter announced that she would reprise her role as Maddie Wachowski for the film.[19] Later in March 2021, it was revealed that Ben Schwartz, Jim Carrey and James Marsden would be reprising their respective roles as Sonic, Dr. Robotnik and Tom Wachowski.[11]

In January 2021, the crew also held auditions for Knuckles. Also, production is searching for an A-List human cameo to make an appearance in the film. Names like Samuel L. Jackson and Chris Rock were thrown around, however the big name cameo is still up in the air at this time.[15] In early February 2021, The Iluminerdi reported that Jason Momoa had been offered the role of Knuckles.[10] On 16 June 2021, it was announced that Shemar Moore had the film for an undisclosed role.[33][34]

In August 2021, Idris Elba announced that he will be voicing Knuckles in the film.[14] Soon after, on 29 September 2021, it was announced that Lee Majdoub would reprise his role as Agent Stone for Sonic the Hedgehog 2 as well.[21] On 7 December 2021, Colleen O'Shaughnessey confirmed that she would reprise her role as Tails following the first film.[12]

During December of 2020, it was reported that the BC Film Commission had listed that the production of Sonic the Hedgehog 2 would take place between 15 March 2021-10 May 2021.[35] In January 2021, Tika Sumpter revealed that the film would shoot in both Vancouver and Hawaii.[19]

Principal photography for Sonic the Hedgehog 2 was done primarily in Vancouver and Hawaii,[27][36] with production beginning in the fomer on 15 March 2021 and with Brandon Trost serving as cinematographer.[37] Meanwhile, director Jeff Fowler confirmed via Twitter on 15 March 2021 that filming for the movie had begun.[38] In an attempt to show his gratitude to the crew for the film, Jim Carrey held a raffle on 7 May 2021 so he could give away a Chevrolet Blazer. Eventually, the car was given to a grip.[39]

Later, on 8 December 2021, Tom Holkenborg, the composer of Sonic the Hedgehog, was announced to return as the composer for the score of Sonic the Hedgehog 2.[3] The debut trailer presented at The Game Awards uses a customised version of "Age Of Heroes" by Really Slow Motion & Giant Apes,[44] once again incorporating the music from Emerald Hill Zone. The final, customised trailer music was composed and produced by Caleb Swift.[45]

Sega of America confirmed on 17 February 2021 that it would continue their partnership with Jakks Pacific on making merchandise to coincide with the release of the film, including action figures, playsets, plush toys and other collectibles.[46] The costume division of Jakks, Disguise, would also be making costumes and accessories.

On 8 July 2021, the Sonic the Hedgehog 2: The Official Movie Pre-quill comic series was announced. This four-part miniseries will serve as a prequel the movie and will feature Sonic adjusting to his new life in Green Hills as boredom starts to set in, leaving it to Tom and Maddie to help Sonic keep his secrets now that he has gotten a taste of the heroics. Additionally, new and returning characters starring in Sonic the Hedgehog 2 will take the lead in stories of their own.[47]

The first theatrical poster was released to theaters on 8 December 2021, with the trailer debuting during The Game Awards 2021 the next day.[48] The trailer was met with positive reaction from fans. Elba's voice acting for Knuckles in particular drew in notable praise. Several reviewers would as well note how positive the reaction to the trailer was in comparison to the first trailer for Sonic the Hedgehog.[49][50]

Nickelodeon, owned by Paramount parent ViacomCBS, also promoted the movie during the network's special broadcast of the NFL Wild Card game between the San Francisco 49ers and the Dallas Cowboys on 16 January 2022. Sonic, in his movie style, made several appearances during the telecast, including a shot of him and Tails glancing to the camera on the stands before cutting to a commercial break.[51]

Sonic the Hedgehog 2 is scheduled for a theatrical release in Australia and Russia on 31 March 2022,[4] It will subsequently receive a public release on 8 April 2022 in the United States.[5] It was later confirmed by Paramount Pictures that both Sonic the Hedgehog and Sonic the Hedgehog 2 would be released on Paramount+ with the latter being added after its theatrical release.[52] In Japan, the film is set to be released during Summer 2022 with the original name Sonic the Movie / Sonic VS Knuckles (ソニック・ザ・ムービー/ソニック VS ナックルズ, Sonikku za Mūbī / Sonikku VS Nakkuruzu?).[53] 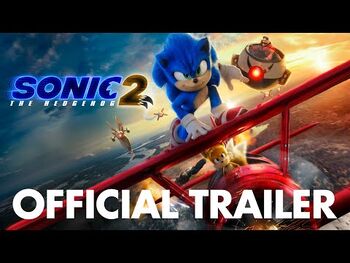 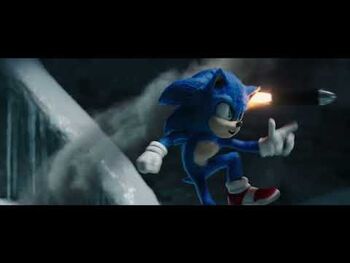 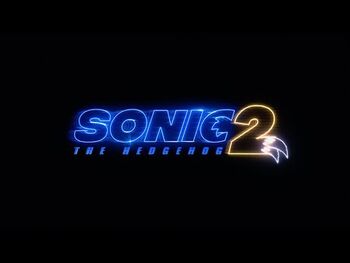 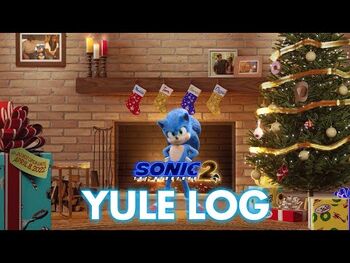