The objective of the game is for Sonic and Tails to complete seven Zones. The seven Zones featured are Emerald Hill Zone, Aquatic Ruin Zone, Hill Top Zone, Mystic Cave Zone, Oil Ocean Zone, Casino Night Zone, and Wing Fortress Zone. The levels themself feature loop-de-loop speedways, laser beams, movable obstacles, and under-water segments. A single power up, an invincibility monitor, can be found in each level as well as Chaos Emeralds. There are ten enemies in the game which will attempt to attack Sonic. If Sonic gets hit he will lose one of six hit points, if all six hit points are lost then the player will lose one of their three lives. Lives can also be lost if a player remains underwater for ninteen seconds. The boss of each Zone is Dr. Robotnik. The number of hits to defeat the boss gradually increases from five-ten and in the final level it becomes fifteen.

The game features a standard direction pad and a large "action" button. It also contains four function buttons on the center of the console to turn off the system, toggle sound effects, pause the game, and a button that both turns on the system and starts the game.

Oddly, you press Up on the D-Pad to jump, and you use button combinations (EX: Left + Action or Up + Right + Action) to perform attacks. 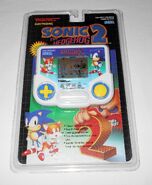 Packaging
Add a photo to this gallery
Sonic the Hedgehog LCD games
Retrieved from "https://sonic.fandom.com/wiki/Sonic_the_Hedgehog_2_(LCD_game)?oldid=2215150"
Community content is available under CC-BY-SA unless otherwise noted.