Sonic the Hedgehog - Remix is an album that consists of remixed tracks from the Japanese soundtrack of Sonic the Hedgehog CD. The tracks are composed and arranged by the game's composers, Naofumi Hataya and Masafumi Ogata, credited as "hata-bow" and "o-gata" respectively. Vocals are provided by "yasu" on tracks 1, 4, and 7, and Momo Michishita as "momo" on track 4.

While the featured arrangements were previously exclusive to this album and did not appear in the game, an instrumental version of the fourth track, "Brand-new World", would later be used on the stage select screen for Time Attack in the 2011 re-release of Sonic the Hedgehog CD (when playing with the Japanese soundtrack selected). 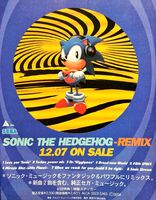 Japanese advertisement
Add a photo to this gallery