The promotional comic derived much of its backstory from the internal Sonic Bible, particularly regarding the Kintobor origin of Dr. Ivo Robotnik. As such, it helped define the early American and European Sonic canon that was adapted into the British Sonic the Comic (although the two comics are otherwise very different).

The story begins in the Green Hill Zone with Sonic the Hedgehog being chased by Dr. Ivo Robotnik (in his wrecking ball Egg-O-Matic) and a horde of Badniks. Sonic evades Robotnik (whose Egg-O-Matic crashes) and then destroys the Badniks, releasing his animal friends (Sally Acorn, Johnny Lightfoot and Chirps) who were trapped inside. His friends say that they should get Dr. Ovi Kintobor's help to fight Robotnik, but Sonic reveals that they cannot, because Kintobor is Robotnik.

Sonic then explains how he was once a brown hedgehog who discovered Kintobor's secret lab. Kintobor sought to rid planet Mobius of evil by storing it in six Chaos Emeralds by means of a machine called the Retro-Orbital Chaos Compressor (ROCC). Sonic and Kintobor became friends. Kintobor allowed Sonic to train on his experimental supersonic treadmill, but it exploded when he ran faster than the speed of sound. The explosion fused Sonic's spines and turned him blue, which Kintobor referred to as the "cobalt effect". The explosion also shredded his tattered sneakers, so Kintobor gave him a pair of red-and-white frictionless shoes to wear instead.

One it was lunchtime, Dr. Kintobor asked Sonic to fetch him a soda and a boiled egg, which Sonic did even before Kintobor finished asking the question. Sonic asked what Kintobor was doing; leading the doctor to explain that he was forced to stabilize the Emeralds within the ROCC (until he can find a Grey Emerald that neutralizes evil). However, he became distracted and spilled his soda on the ROCC's controls. The ROCC exploded, scattering its containment rings everywhere and zapping Kintobor with "over 10,000 volts of pure evil energy"; transforming him into Dr. Robotnik.

As Sonic concludes the story, he explains he has been collecting the lost rings so as to put the ROCC back together. He then rushes off to face Robotnik.

Sometime later, Sonic comes face to face with Robotnik, but is surrounded by Newtrons and Buzz Bombers. He rushes off towards a distant mountain, knowing that there's a giant loop on the other side of a mountain. However, deciding there is no time to go around it, Sonic uses his Spin Attack to tunnel straight through the base of the mountain and out the other side, where he runs around the loop. He then spots a Giant Ring and leaps through it, and is sent to the Warp of Confusion (Special Stage). The Warp of Confusion is a bizarre place full of rings, but there is no concept of "up" or "down" and Sonic feels like he will be sick until he manages to find a Chaos Emerald, which warps him back to Mobius.

However, Sonic reappears in the Labyrinth Zone, and is plunged under water. He cannot surface for fear of flamethrowers above, and underwater he is chased by Jaws Badniks. Fortunately, a current pulls him into a tunnel opening and deposits him outside the Labyrinth. When he gets to the shore, two more friends (Tux and Joe Sushi) say that Robotnik has been dumping toxic sewage into the lake. Sonic once again spots Robotnik and races after him.

Sonic chases Robotnik through the Starlight Zone, avoiding the traps, and then bounces on a spring that sends him into Robotnik's secret lab. He finds that Porker Lewis has been trapped to a conveyor belt and is about to be sawed in half, but before Sonic can save him Robotnik jumps on him from above, making him drop the Chaos Emerald. Sonic is forced to choose between saving Porker or recovering the Emerald, and Sonic chooses to save Porker. Robotnik steals the Emerald and escapes in his Egg-O-Matic. He destroys Robotnik's Badnik transforming machine, releasing Sally Acorn, Johnny Lightfoot, Tux and Flicky, who had been trapped inside. Sonic tells his friends to stay out of Robotnik's way, because he's going to deal with the evil doctor once and for all.

The comic ends by telling readers to continue the adventure by playing Sonic the Hedgehog on the Sega Genesis. 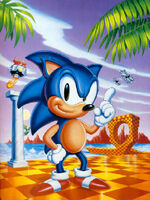