— Sonic, before the fight.

After finding no clues to where Sonic's whereabouts in Dusty Desert, Silver and Amy headed to Castle Town. Coincidentally, Silver saw Sonic there and tried to attack him. When that attack failed, he engaged Sonic directly in a fight.

At the beginning of the hedgehog duel, Sonic makes a beeline for Silver. The player must get out of the way and grab some of the Rings in the middle of the courtyard for safety. When the player has the Rings, they can initiate counterattacks to take out Sonic. The player must do this carefully, as Sonic will continue attacking the player. Sonic menaces Silver with a long Homing Attack that cannot be avoided no matter how far awaythe player is, so they shoud avoid standing still long enough for Sonic to get a lock on Silver's position, and attack him at every possible opportunity.  After the player has tagged Sonic with a chair or barrel, he will falter. When the player sees stars over his head, they should immediately lift any nearby chairs and tables in the plaza with Psychokinesis and hold on to them, since Sonic cannot be damaged in this state. As soon as Sonic stands and starts running toward the player, the player should hit him again with a chair to knock him down once more. The player should leave a few Rings in the middle of the plaza in case they take damage and are unable to recollect the ones they drop. 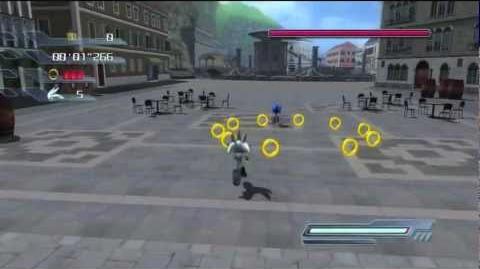