Sonic the Hedgehog is an educational game for the Leapfrog Didj learning system released in 2008.

The gameplay is similar to the original Sonic the Hedgehog games on the Sega Genesis.

Sonic himself retains most of his normal moves from the Sega Genesis games but comes with some of his newer moves as well, such as the Homing Attack and Wall Jump.

The game features seven levels (referred to as Acts) that are in groups of four Zones. Each level is based on various Zones from earlier Sonic games.

Zones marked with a * indicate that the level ends with a boss fight which is different for each zone. Defeating the boss will earn the player a Chaos Emerald, with the color depending on the Zone the boss fight took place in. The player earns the green Emerald in Emerald Hill Zone, the purple Emerald in Hydrocity Zone, and the yellow Emerald in Chemical Plant Zone.

Defeating the boss of Egg Base Zone awards the player with the Red Emerald (Known as the Master Emerald) before the credits.

Curricular Gadgets are minigames that are activated by running through Giant Rings, with a different amount in each level.

In addition, the design of the area the minigame takes place in changes depending on the level.

This minigame starts with Sonic standing on the Word Wheel, which resembles a metal nut on a screw from Metropolis Zone, with letters printed on the sides. The letter currently selected is highlighted in yellow. Moving left and right causes the word wheel to move, thus changing the letter selected. Pressing A causes Sonic to jump and pull the lever above. Pressing up on the D-pad activates capital letters.

If the letter the player selected is correct, it is placed inside a box which is located at the bottom of the screen. Collecting all the right letters causes ten Rings to appear on the ground and allows Sonic to hop off the word wheel to collect them.

Sonic will enter one of the cannons from Carnival Night Zone during the game's tutorial. Badniks will pass by the cannon and carry large monitors with a random amount of letters with them. On the top of the screen is a box with an incomplete word. The player needs to aim the cannon with the D-pad and press A to launch Sonic into the monitor. Sonic will run back inside the cannon afterward.

Breaking the monitor with the right letters causes ten Rings to appear on the ground, which Sonic will automatically collect while running back to the cannon.

The game starts in an area with two platforms, one from the left to use as stairs and a bigger one coming from the right. The right side also contains a spring for the player to reach the bigger platform. Unlike the other two minigames, which involve selecting the right letters to spell/complete a word, all the correct letters to spell the word are located inside monitors, but the player has to open each one in order.

Opening all the monitors in the correct order causes six Rings to appear on the ground and six more Rings on the bigger platform, which Sonic can collect before the next question.

During the game, the player will be able to earn various achievements called Badges, which are part of the Didj reward system. each Badge will award the player with a certain amount of points called Bitz, depending on the value of the achievement.

Badges are displayed on the player’s Achievement Screen from the game's menu and are stored (alongside the Bitz) on the LeapFrog website.

Bitz are used as currency on the LeapFrog website and can be spent in order to download additional content for this game, as well as other titles on the Didj.

Because the Didj website has shut down, the full list of prizes is not confirmed, but according to the game's files the following prizes were planned: 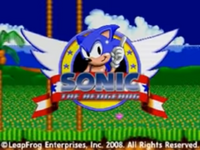 The game's title screen
Add a photo to this gallery