The Sonic game that started it all is now free-to-play and optimized for mobile devices!

Sonic the Hedgehog, also known as Sonic the Hedgehog Classic, is a remastered version of the original Sonic the Hedgehog for the Sega Mega Drive. It was developed by Christian Whitehead and Headcannon using the Retro Engine, the same game engine used for the 2011 remaster of Sonic the Hedgehog CD. The game was first announced by Sega on 26 March 2013.[2] It was released in May 2013 for iOS and Android devices, with the iOS version being a free update to those who purchased the earlier port of the game.

In his diabolical quest to acquire the legendary Chaos Emeralds, Dr. Eggman (AKA Dr. Ivo Robotnik) has invaded South Island, where he has snatched the local Animals on the island and using them to power his "Badniks". Shortly after his arrival, South Island has been littered with a brigade of these Badniks and filled with dangerous traps.[3]

Having learned of Eggman's actions, Sonic the Hedgehog rushes to South Island to thwart his plans. In the end, Sonic manages to collect the Chaos Emeralds and defeat the doctor, freeing the island from his rule.

Trying to emulate the physics of the original Sonic the Hedgehog, Sonic the Hedgehog is a 2D side-scrolling platform video game. The game also uses an autosave feature that saves the player's progress at certain points.

Like in the original game, Sonic the Hedgehog is divided into seven Zones, all of which have three Acts each with a battle against Dr. Eggman at the end of the third Act (with the exception of Final Zone, which is a single, short Act).

Time Attack is a new mode exclusive to this game in which the player has to pass Acts in the least amount of time possible. The only playable character here is Sonic. All 1-Up Item Boxes are removed, but the time HUD also counts milliseconds. Also, Special Stages here count time, but not points or Rings.

When using Time Attack, the players select a Zone and Act to race through; the Acts available depend on how far the player has gotten in the game. Upon completing an Act, the player is graded based on their time. The game saves and records the player's best times, which can be compared to those on a personal list of best time logs.

Help & Options is the settings menu of Sonic the Hedgehog, which holds the following options:

Reception to this version of Sonic the Hedgehog has mainly being positive. David Oxford of Gamezebo, who gave a rating of 4.5/5, praised the game's new features, sound quality and the customisable

but still felt that the virtual controls can be tricky. However, he believed that the inclusion of Tails and Knuckles seems to "feel slightly out of place." In addition, he has also noted a few bugs and oddities.[4] Chris Buffa of Modojo, who also gave a rating of 4.5/5, agreed Oxford about the touch control issue.[5] 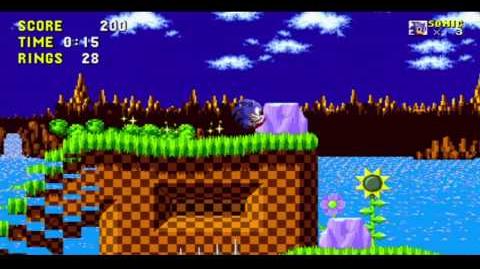