At ground zero of the former Eggman Empire bunker, Tangle tells Whisper that she wants to help her as she sees that she carries a lot of baggage and asks what Mimic did to her. After a short pause, Whisper begins to tell Tangle about the five members of the Diamond Cutters while presenting a picture of them; herself, their scout; Smithy, their crafter; Slinger, their marksman; Claire Voyance, their psy-op; and Mimic, their infiltrator. Tangle compliments Whisper on how cool they looked. Whisper goes on to say that they were an anti-Eggman mercenary team and they took the most dangerous missions. At the time, she thought they were all committed to the cause. Whisper gets her mask scope to show Tangle the events of their last mission and tells her that video of their masks were linked to let them review their missions and study each other's perspectives. Slightly uneasy after the bunker exploded, Tangle puts on Whisper's mask. From Smithy's perspective, at an Eggman Empire base, he, Claire and Slinger pretended to be captured by Mimic who was disguised as an Egg Pawn. After they managed to destroy the foot soldiers, Smithy asked Claire where the patrols where. Claire managed to see one formation on the far end of the base and two more inside that were recharging. Smithy then turned to Whisper, who told him that she saw one patrol that was one hundred meters from the front gate. Switching to Mimic's perspective, Smithy went on to say that the door should be blown while they tore down everything down near the center. With this, Smithy and Slinger began to shoot at many Egg Pawns. From Whisper's distance away, she saw an approaching Blaster tank with several Badniks following it and swiftly took it down with her rifle. On the inside, Claire neutralized the central command tower. Mimic quickly built a way out with his Wispon and the others followed while Whisper gave the all clear to leave. Tangle is enjoying the mission and calls the Diamond Cutters amazing, with Whisper's Cyan Wisp agreeing with her. Tangle is sharply taken aback after hearing the Wisp speak. She soon realizes that Whisper's mask translates the Wisp's language.

According to Whisper, Smithy was a genius and was the one who created their masks, Wispons and miscellaneous gear. The lion wished for the team to act as one with the help of their masks. The Variable Wispon was actually a prototype and they were all meant to have one so that they could all use each of the Wisps. Whisper solemnly stops but Tangle proceeds to ask her to continue as the truth was eating her up inside. When Whisper refuses to tell her, Tangle asks to see the footage on her mask's file instead, not wanting to rush her into confronting her past. However, she reasons that the more Whisper can share with her, the more the lemur can help her. The Wisps gather around Whisper, agreeing with Tangle's point of view. With this, Whisper inputs new commands into her mask and hands it to Tangle. Tangle puts on the mask to view another playback from Whisper's point of view. Mimic can be seen talking about an Eggman base that the team should take down so that his forces along the coastline would blackout. He saw this as a big opportunity as Eggman was currently focusing on taking over the world as a certain hedgehog had disappeared. Claire turned to Whisper and asked her to hang back like she usually did despite the fact that Mimic said that they were all needed on the ground for the mission. Claire told her that she had a bad feeling about the mission but still did not want to pass up such an opportunity. At the Eggman base, the Diamond Cutters found no security of any kind. Claire had trouble seeing anything in the base, deducing Eggman must have been projecting alpha waves. Whisper also reported that no activity was occurring outside of the base. Slinger did not like how Eggman seemed more prepared for the Diamond Cutters this time while Mimic believed the doctor was simply adapting since no other team was taking down his bases. Smithy found both Slinger and Mimic right and asked the latter to scout around for an ambush while they pushed ahead. Soon, Claire deduced where the alpha waves were occurring the strongest, believing Eggman was hiding something in unfamiliar capsules. Smithy told the team to lock and load so that they could destroy the base's interior. Smithy then came across a capsule, believing it contained something that looked similar to Metal Sonic. To his shock, it was actually a Shadow Android. The room door locked behind the trio and many more Shadow Androids began to break out of their capsules. Unable to escape, the Diamond Cutters tried to fight against androids with all of their strength. Slinger and Claire attempted to contact Whisper and Mimic but neither of them answered.

Elsewhere in the base, Mimic is talking with Dr. Eggman, who is pleased with his betrayal of the Diamond Cutters. Mimic estimates the doctor will have ninety-nine percent of the world taken over in a month, stating that he preferred to play for the winning team. Mimic then asked if he was free to go, to which Eggman said yes, forgiving the octopus for his crimes against him. Mimic's Blue Wisp immediately flew away from him, glared at Eggman, and escaped through an air vent. Disregarding this, Eggman turned back to Mimic to ask why only three targets were down. Mimic told him that Whisper stayed outside as a lookout and was not as much of a threat as the other three. Not caring for such excuses, Eggman demanded that Mimic finished the job. Soon, as Whisper hid in a tree, Mimic pretended to act as an injured Slinger to lure the wolf in. The shapeshifter believed that Whisper abandoned the team after hearing everything. Mimic knew Eggman would not be happy with him but after he found Whisper's Wispon, he devised to pretend that his mask was hers and provide the objects as proof that she was defeated. As he turned away, Whisper comforted her Orange Wisp.

Horrified at what she has just seen, Tangle immediately removes Whisper's mask and gives it back to her. Whisper says she waited until it was all clear to rescue the rest of the Wisps inside the Eggman base. She then went back to the Diamond Cutters' base to retrieve the Variable Wispon. At a loss for words, Tangle becomes completely frustrated, takes a deep breath and asks why Whisper would hold onto that footage, to which the wolf replies "Never forget. Never forgive." Tangle believes this was why Whisper began her crusade as the "Guardian Angel". She also realizes from the footage it must have been awkward to see Shadow on the mission to defeat Neo Metal Sonic. Whisper states that she knew it was not his fault but it was difficult for her to see him. Tangle then asks why Whisper chose to leave her behind knowing how dangerous Mimic was as he could easily get into the wolf's head. She also asks why she did not ask anyone else for help if she just did not want to work with Tangle. Whisper admits to Tangle that she is the first friend that she has allowed herself to have since the incident and could not stand the thought of losing anyone again. A teary-eyed Tangle protests, saying Whisper is now her friend as well and friends look out for each other, no matter what. Whisper reminds Tangle that Mimic nearly defeated both of them but the lemur states that this meant he would receive double the payback. She tells her they will bring him down and make him regret all of his misdeeds. Now knowing how Mimic worked, Tangle refuses to back down from the fight. When Whisper notes that Tangle cannot be discouraged, Tangle replies saying that Whisper needed positive energy and her friends needed avenging. With this, Whisper hugs the lemur and thanks her. The wolf then notes that the trail is cold and it would take a while to find Mimic again. Tangle disagrees, believing Eggman would want solid proof about their deaths this time, meaning that Mimic will come back and they will give him a taste of his own medicine.

Later, Mimic returns back to the site of the explosion on his hoverbike. He contacts Eggman to confirm that the girls were gone and all that was left was soot and slag, but just as Tangle predicted, Eggman demands proof of the deed and orders Mimic look thoroughly for the pair so as to not make another mistake. Mimic insists they would have been atomized and thinks this is proof enough, to which the evil doctor tells the octopus that it is his own problem. Due to Mimic's lies, Whisper became the last Diamond Cutter alive and the destructive beacon of hope during the War. Mimic asks if Eggman has something better to do than hunt down a mercenary, to which Eggman replies that Sonic gives him enough trouble as it is and threatens to send Metal Sonic after the octopus if he fails him again. Mimic finds the empty safe, finding no one there. The tracks trailing away from the safe were perfect with no signs of limping. Mimic follows the tracks to a small ditch that has the words "WE END THIS WHERE WE STARTED" engraved into it. From this, Mimic asks Eggman for backup.

Cover RI colors. Art by Priscilla Tramontano.
Add a photo to this gallery

Cover A (provisional). Art by Evan Stanley.
Add a photo to this gallery 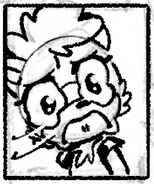 Page fifteen inks. Art by Evan Stanley.
Add a photo to this gallery

Sonic the Hedgehog comics
Retrieved from "https://sonic.fandom.com/wiki/Sonic_the_Hedgehog:_Tangle_%26_Whisper_Issue_3?oldid=2183132"
Community content is available under CC-BY-SA unless otherwise noted.