Sonic and Amy Rose are still touring Shanazar and, upon discovering an advanced Zone, are looking forward to relaxing somewhere where nobody knows them. Unfortunately, their arrival is noticed by the public, who know who the hedgehogs are and have been watching their recent adventures through micro-cameras. Because of their bravery and excitement, Skorrg has chosen them to represent the city in the "Space Race" and, before Sonic can totally refuse, the two hedgehogs are beamed above Skorrg's ship. Sonic is quickly subdued and convinced into racing with Amy's life at stake. Beamed down to an asteroid, Sonic meets opponent Turbo and learns that he must win if he wants to see Amy again. During the race, Turbo confesses that his family will be killed if he loses. Fortunately for him, Sonic isn't used to running in zero gravity and the alien gains an advantage.

Back at the crossbow, a scowling Amy has had her crossbow confiscated but still has a headband. She quickly uses it take out Skorrg's assistant and pilot and is able to transmit to Sonic that she has taken over Skorrg's ship. The message relieves Sonic as he has lost the race. However, Turbo reveals that the loser's ship is to be destroyed by the rival ship! Sonic tells Amy to escape, but the pilot is down and she nor Skorrg have any idea how to fly the ship. 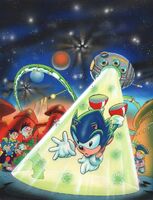 Front cover, raw.
Add a photo to this gallery

Sonic the Comic
Retrieved from "https://sonic.fandom.com/wiki/Sonic_the_Comic_Issue_161?oldid=2282100"
Community content is available under CC-BY-SA unless otherwise noted.