On the home planet of the Drakon Empire, Emperor Ko-Dorr (leader of the House of War) and Master Scholar (leader of the House of Knowledge) have been summoned by Sister Haggra (leader of the House of Magic). Haggra has seen an image of a blue hedgehog figure (actually Sonic the Hedgehog) in the Vapours of Destiny, and has learned that he knows the answer to the ancient mystery: he knows the secret of the Chaos Emeralds! Not knowing who Sonic was herself, she reluctantly summoned Ko-Dorr and Master Scholar. When asked, they both claim not to know the individual - although Haggra knows that Ko-Dorr recently put an off-worlder on trial, Ko-Dorr claims that he was "taller, much taller and... and he was much more of a purple colour!" Nevertheless, Sister Haggra insists that, whoever and wherever this person is, "we shall have him!"

Meanwhile, in Doctor Robotnik's base on Flickies' Island, Grimer reports that their Badnik raid has failed. Robotnik retorts that Grimer is a snivelling imbecile: he never expected to beat Sonic, he just wanted to remind him that Robotnik is still here and will someday take back control of Mobius. Robotnik knows that no ordinary Badnik can defeat Sonic, which is why he is constructing more Knuckles Metallixes (made more powerful than ever with the technical support of Emperor Ko-Dorr).

Suddenly, a Mobius Ring materialises in the base, and Emperor Ko-Dorr steps through flanked by two Sentinels. Ko-Dorr says it is time for Robotnik to live up to his end of their bargain and get the Chaos Emerald for the Ko-Dorr. Ko-Dorr has become concerned now that Sister Haggra knows about Sonic - Ko-Dorr had to pretend not to know him. Ko-Dorr plans to use the power of the Chaos Emeralds to rule the House of Magic and the House of Knowledge himself. Robotnik demurs, saying that the plan was that he would use his Metallixes to get the Emeralds secretly, without the other rulers of Drakon finding out. But Ko-Dorr's patience is at an end, and he demands to know where the Emeralds are now.

In the Emerald Hill Zone, Sonic and Tails watch the Flickies fly back to Flickies' Island. Tails hopes Robotnik won't catch them again. Just then, they spot the Floating Island behind some clouds. Tails is impressed that a few Emeralds can keep an island so large floating in the air, but Sonic points out that the Chaos Emeralds are probably the greatest power source in the galaxy... Suddenly, Sonic gets a sudden chill, as if something terrible is about to happen. But as soon as it comes, he brushes it off - after all, Robotnik has been deposed and Mobius is free again. From now on, things can only get better!

Ebony runs a famous coffee bar, The Groovy Train, in a part of the Metropolis Zone known as 'The Neighbourhood'. Inside, psychic Pyjamas has a terrifying vision of a being with incredible power... enough to destroy the entire world. Ebony tells her to lower her voice or she'll scare away the customers, but Pyjamas' vision is too strong. And, just then, he arrives... but the person who walks through the door is an amnesiac Super Sonic.

In a dingy area of the city, three homeless Mobians complain about the state of the world today. They would have thought things would have got better with the removal of Doctor Robotnik, but apparently not for them. Their moanings are suddenly cut short as they are blasted aside by the appearance of Bio-Hazard, who has been teleported from the Special Zone to Mobius.

Back in the Special Zone, Lightmare reports the successful use of the Dimensional Teleporter to Lord Sidewinder. Sidewinder sent Bio-Hazard to Mobius with a special tracker that will allow him to find Super Sonic, who should be easy to capture in his weakened state. He plans to harness Super Sonic's power and become invincible. Mr Fry is unsure about staying in New Tek City, since they've only just escaped from prison, but Sidewinder lashes out, saying that obtaining Super Sonic's power is worth any risk.

Back in the Groovy Train, Super explains to Ebony and Pyjamas that he has lost his memory. He's been wandering around the city for weeks and has now used up the last of his money, so he came in to ask for a job. Pyjamas is set against this, as she senses great evil in him, but Ebony tells her to be quiet. The conservation is cut short when a customer named Jack Kerow-Hack flies across the room and smashes into their table. In fact, the entire bar is being destroyed... by a newly arrived Bio-Hazard! He's causing such a commotion that Ebony can't hear what he's yelling over the din: "Super Sonic, I've come for you!"

Decap Attack - "Return of the Pumpkins"

On Halloween at Castle Frank N Stein, a vast horde of pumpkins gathers in the shadows as Prof, Chuck, Head and Igor watch TV. Suddenly, the pumpkins attack with their cutting sarcasm! Fortunately, Kevin from Transylvanian Pest Control swings in through the window and the pumpkins scatter. However, Kevin says they're not gone, but rather planning something cunning.

Kevin explains that, even though he got rid of the castle's pumpkin infestation last year, they've escaped from their cells. Even worse, they are South Patagonian Red pumpkins, which are homing pumpkins, leading them right back to the castle! (The Northumbrian Gold, on the other hand, are nomadic and very polite.) Luckily, Kevin has a crazy plan to beat them, because fruit is the natural enemy of the vegetable.

Kevin paints Head green and puts a stalk on his head so he looks like an apple, then sends him off to find the pumpkins. When he does, they chase him up to the battlements, where a giant banana (Prof), pineapple (Chuck) and pear (Igor) are waiting. Rather than fight the whole fruit salad, the vegetables bounce over the battlements, and land in Kevin's truck far below.

In the Old Hill Zone, the locals have been hearing a terrible wailing noise from an empty house. They believe there are ghosts in the house, and the Zone has been referred to lately as the "Haunted House Zone". When Amy and Tekno learn about this, they decide to investigate.

It's a creepy looking Gothic building, and as soon as they enter they hear the terrible moan like somebody in pain. A stone gargoyle nearly lands on Tekno, but Amy pushes her out of the way in time. They follow the source of the sound upstairs, and to their sheer horror they discover that it is coming from... Fabian Vane, world's worst pop star. He's been rehearsing for a comeback gig and his singing apparently scared off the locals.

Suddenly, a block of masonry falls from the ceiling and crushes his speaker. Tekno says that his singing has weakened the foundations and the three of them rush out of the building moments before it collapses. Fabian has lost his new demo tapes, scotching plans for his comeback (much to the relief of the girls). But as Amy points out, "At least you can say you brought down the house!" 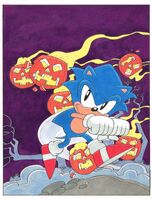 Sonic the Comic
Community content is available under CC-BY-SA unless otherwise noted.
Advertisement