Sonic the Hedgehog - "Crisis in the Chemical Plant Zone, Part 1"

In the Control Centre in the Emerald Hill Village, the Kintobor Computer receives a call for help from the Chemical Plant Zone. He relays to Sonic and Tails the message regarding a malfunction that could potentially cause a major ecological disaster and spread pollution on a massive scale. They are surprised when the message comes in audio only (no video), and Tails thinks it might be a trap, but Sonic says that there's nothing to worry about now that Robotnik's out of the picture.

They fly to the Chemical Plant Zone in their Tornado. Tails asks if the people can really turn the Zone into an environmentally friendly area, and Sonic says he hopes so, because Mobius needs the Zone's industries to prosper. When they arrive at the main building, however, they are forced to wait in the reception for some time before being shown in to see the directors, who are revealed to be Sonic's old enemies the Marxio Brothers. Sonic demands that they leave Planet Mobius at once, but the Marxios reveal that they actually own the Zone (and have papers to prove it). They received a free pardon, claiming that they had been "misled by that wicked Doctor Robotnik!" An incredulous Sonic decides to just fix the problem and leave as soon as possible.

Chicio,who has been put in charge of plant safety, leads Sonic into the factory entrance. They believe it will soon explode, and that all of the technicians they sent in to fix it ran out again, scared half to death. Although Tails still has apprehensions, Sonic heads inside anyway and Tails follows. The place is dripping with Mega Mack, the chemical designed specifically to kill Sonic. Soon, Sonic and Tails are attacked by creatures that rise out of the Mega Mack. In fact, they are actually made out of it. They claim to have met Sonic before but he doesn't recognise them, so instead they try to poison him with the Mega Mack. It starts to work and he gets dizzy (but refuses to admit this to Tails), and tries to take them out with a whirlwind of Sonic speed. Sadly, this has no effect on the creatures, which are not solid and can't be harmed, but despite this they run away down a tunnel and Sonic follows.

Soon, Sonic and Tails emerge overlooking a vast room, flooded with Mega Mack and filled with the Mega Mack creatures. They say that Sonic is too late: soon, the factory will explode and the Mega Mack will flood into the Emerald River and head towards the Emerald Hill Zone. It will become so polluted that nothing will be able to grow there for a hundred years.

A series of robberies has taken place in the Eldorado Zone. When darts champion Eric Bungalow finds his 21-carat gold trophy stolen, he spots a shadowed figure flying away and believes it's Tails. However, when the real Tails appears from the other direction, pointing out that he couldn't do it because he was elsewhere, nobody seems willing to believe him. "So?" says one. "You've always been a fast mover." Even when he says that he's a Freedom Fighter they aren't convinced, suggesting that society made him do it or blaming his parents. A suited bear even tries to capture him for a reward, but eventually Tails convinces them to let him prove his innocence.

That night, the real thief overhears that the 'Golden Bike Frame of the Steptoe Zone' is on display at the local museum and decides to steal it. However, when he gets there he finds he's been tricked, and that the 'Golden Bike Frame' is just a rusty old regular bike frame painted gold. Tails and some of the local residents catch him in the act. Referring to himself as "The Leaf, master thief!" the crook flies out of the window. Tails quickly flies after, not willing to let him get away.

The Leaf flies by means of a pair of mechanical wings, which allows him to be faster and more maneuverable in the air, making it difficult for Tails to keep up. He taunts Tails, saying that even though it was fun when Tails took the blame for his crimes, he is pleased that now people will know that "The Leaf is the most brilliant, unstoppable thief of all time!" However, Tails continues to pursue the Leaf until the batteries in his wings run out of power and he starts to fall out of the sky. Luckily, Tails is there to catch him and hand him over to the authorities.

Back at ground level, the local residents congratulate Tails and claim they knew he was innocent all along. They finally apologise for mistrusting him.

After midnight, Chuck sneaks back into Castle Frank N Stein and up to his room, hiding a large tub of Barbecued Gibbon flavour Slurp-A-Cheese ("The cheese you can drink"). Suddenly, Igor jumps out from behind a curtain, catching Chuck in the act. Igor is horrified that anyone likes Slurp-A-Cheese, and Chuck himself is slightly ashamed, but when Igor threatens to tell the Professor, Chuck gets mad and attacks. "Nobody must ever know!" Chuck beats up Igor, eventually knocking him down by throwing Head at him, then discovers a ticket in his tub of Slurp-A-Cheese, saying he's won a tour of the factory.

The next morning, Chuck and Head show up outside the factory. Head wants a gas mask to keep out the smell, but Chuck turns them down because he loves the smell of raw Slurp-A-Cheese. They are greeted by Curdle, the owner, who shows them round. In the research department, Slurp-A-Kins "push back the boundaries of runny cheese technology". One Slurp-A-Kind demonstrates their Hair-Styling Cheese Mousse... it is eaten off his head by mice.

Just then, Curdle finds a slab of hard cheese on the floor and becomes furious. "I only want to see runny cheese in my factory... runny, do you hear?" Head thinks he's a nutter. Curdle notices that the pressure in the cheese vats is critical and that they're going to explode... just as the Slurp-A-Kins decide to revolt: "Down with runny cheese!"

Amy Rose and Tekno the Canary are trying to find their way home to Planet Mobius after an adventure in deep space, having borrowed a small spaceship and a map from some aliens. However, they soon find themselves completely lost and decide to stop on a blue planet for directions. Unfortunately, they accidentally crash the ship. They are spotted by a nearby scientist, Professor Cratermass, who is amazed that aliens are actually landing on Earth!

However, in a secret underground base a few miles away, the landing has also been noticed by members of Operation Starwatch, who report to their commanding officer, Colonel Granite. He immediately orders the men to mobilise: they have aliens to catch!

Meanwhile, Professor Cratermass cautiously approaches the spaceship, waving a white flag and speaking very slowly and carefully: "Well... come... to... Earth!" This amuses Amy and Tekno, who respond by saying "Yo, Professor! Do all you Earthy types talk so slow?" Cratermass apologises, explaining that he's never met an alien before - Amy says they're not aliens, but rather a hedgehog and a canary. Cratermass points out a wild hedgehog nearby, saying that's what they look like on Earth, then invites them to his house which is nearby.

Amy explains that they just want to get back to their own planet, and Cratermass offers to help. He's been trying to build a gateway to infra-space, which will allow him to access any planet in the universe, but he hasn't been able to complete his data. Tekno offers to help out (impressing the Professor, who hasn't seen any computer-literate canaries on Earth before), but before they can finish the program a soldier of Starwatch kicks down the door, and Colonel Granite takes Amy, Tekno and Cratermass as prisoners of Operation Starwatch. 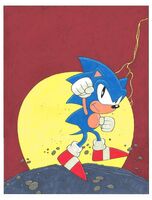 Sonic the Comic
Community content is available under CC-BY-SA unless otherwise noted.