Promotional art of Sonic at the Olympic Games.

Sonic, Tails, Knuckles and Amy go for the gold! Master five events including the 1500m, 400m Hurdles, Triple Jump, Discus and Javelin and earn your place on the podium.

Sonic at the Olympic Games, also known as Sonic at the Olympics,[3][4] is a sports game released for mobile on 16 June 2008 as part of the Sega Mobile service offered by Sega. A shorter browser port of the game developed by Mediatonic was later released along with the launch of the PlaySEGA web service on 14 October 2008, and also made available on the Samsung and Sega Mobile websites.[3][4]

In this game, Sonic, Tails, Knuckles and Amy Rose compete for Olympic medals. There are five events: 1500m Hurdles, 400m Hurdles, Triple Jump, Discus, and Javelin. While the mobile version of the game contains all five events, the PlaySEGA version only has Discus and Javelin available to play.[3] The game has one-button controls for the events and features varying difficulty levels: Qualifying Round, Heats, Semi Finals, and the Finals. There is a high-scores board that the player can upload their scores to and compare nationally. Points are gathered by finishing an event first and gaining Rings.

Sonic at the Olympic Games was first announced by Sega on 8 April 2008 as part of the latest Sega Mobile game line-up.[5][6] Later in the month, a playable demo of the game was made available at CTIA Wireless 2008.[1][7] A browser port of Sonic at the Olympic Games developed by Mediatonic was revealed and released along with the PlaySEGA web service on 14 October 2008, and later released on the Samsung and Sega Mobile websites.[2][4] It was designed with less events to interest users in downloading the full mobile version.[3] 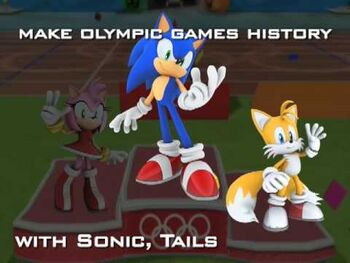