Sonic X Volume 9 is the ninth DVD released in Australia containing three episodes of the anime series Sonic X. As with the other Sonic X Volumes, the DVD also comes with a trailer of Sonic Mega Collection Plus.

In order to defeat Eggman, the EOP (Executive Office of the President) while dispatching GUN and Beetle, (robots made from the debris of DR. Eggman's robots) to Egg Fort 2, evacuate the people to keep the casualties that may occur from Chaos Control down to a minimum. Sonic, Tails, Rouge, Topaz and Knuckles each head their own way for Egg Fort 2 in search of the last Chaos Emerald.

One stormy rainy day, Big the Cat and Froggy find a Chaos Emerald. At the same time a transparent liquid-like creature appears, enters Froggy's body, and suddenly swallows the Chaos Emerald. Then, it flees off somewhere. Big the Cat goes after Froggy. Six months have passed since a part of the world that Sonic and his friends used to live in, appeared in this world because of Chaos Control. The people are living in peace. However, Dr. Eggman is again burning with passion with yet another one of his ambitions...

Sonic and the others, after learning from Knuckles that the Master Emerald had been destroyed, set off ahead of Eggman to search for the Chaos Emerald. Chris, in the meantime, decides to continue looking for Froggy together with Big the Cat. Knuckles finds a debris of the Master Emerald at Casinopolis. When he picks it up, he experiences a strange flashback of the scenes of the world of the past go through his head. It is a scene of his ancestors, the Knuckles clan, who are about to challenge someone in battle! 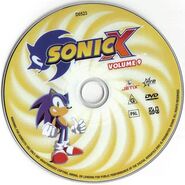 Disc
Add a photo to this gallery
Sonic X DVDs
Retrieved from "https://sonic.fandom.com/wiki/Sonic_X_Volume_9_(Australia)?oldid=2202286"
Community content is available under CC-BY-SA unless otherwise noted.